Sometimes a trailer comes along that is so revolting that you can actually hear an involuntary hiss start to rise from the audience. The audience is suddenly united into one seething mass of contempt, every single time the trailer airs. One such trailer was for Ryan Murphy’s Eat Pray Love. Let’s watch it, shall we?

Is your gorge rising? Our heroine ditches her husband for a boytoy, feels depressed about it, decides she needs a year of “me time”, spends months eating at all the best kitchens in Italy and bragging about how enlightening it is, then chills out with a guru in India, then, all tuckered out, hits an Indonesian tourist resort, where she finally finds sexual fulfillment with Javier Bardem.

Obviously it’s no surprise that the movie was a mega-flop, but the real shocker is that the story originally appeared as a memoir which became a runaway best-seller. How could this be? How could anyone ever identify with this supremely smug jet-setting dilettante?

The answer is that all behavior looks worse onscreen. When you read a book written from a first-person perspective, you’re not looking at the person doing these things, you’re looking out at the world through her eyes. All that you perceive of this world is whatever she perceives, which means also that you miss everything she misses. Your perspective is her perspective, for good or ill.

But all movies are told from a third person perspective. The audience, represented by the cameraman, is that invisible third person looking at our heroine objectively. No matter how much voiceover gets ladled on, we’re never going to be totally inside Julia Roberts’s head. We’ll always be outside, seeing her character as she really is. 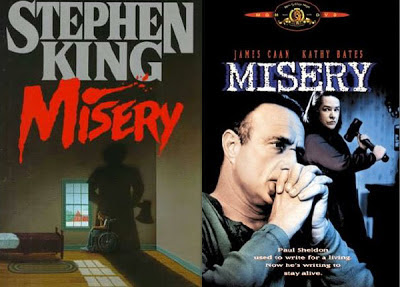 Here’s a very different example: In the Stephen King’s novel “Misery”, superfan Annie Wilkes cuts off author Paul Sheldon’s foot with an ax. It’s the signature moment in the book, and it even provides the cover image. But when Rob Reiner turned it into a great movie…he just couldn’t go through with it. He had Annie hobble Paul’s foot with a sledgehammer instead.

In a book, King can wallow in the horror of the chop, then quickly shift our focus to other details, such as the Paul’s re-doubled urge to escape. But in the movie, Reiner knew that the audience would never get over it. We’d just keep staring at that awful stump, wondering how the poor wretch could even find the will to go on. It would stop feeling like a thriller and start feeling like a tragedy.

It was the right call. The sledgehammer scene was plenty brutal in the theater, trust me. It was just about the max an audience could take and still be able to root for a happy ending. Reiner knew was Murphy didn’t: all behavior looks worse onscreen.
Posted by Matt Bird at 4:00 PM

Oh wow, what an interesting perspective, and hey, "Eat Pray Love" makes a little bit more sense to me now, as far as the book-sensation goes.

Hmm, this gives me quite a bit to think about.

maybe "Eat Pray Love"'s heroine would have been more sympathetic if her husband had died?

Yup, that would definitely help, but that's the problem with true stories-- the real ex-husband might have said "Hey!".

The MISERY example is right on, a perfect illustration of what you're talking about via the sound judgment call of an experienced storyteller working with a great piece of material.

EAT PRAY LOVE perhaps not so much. I'd say it more likely illustrates the catch-22 that movies have accurately casting bankable actors who can get a movie made and released yet look anything remotely like the purportedly "normal" people who are often the true subject of the books upon which films like this are based. Is it really that all the behavior in EAT PRAY LOVE is worse on film because we're not privy to the protagonist's inner thoughts? Or that the audience simply can't believe that anyone who looks like Julia Roberts would have any of the protagonist's problems and that if she did she must be an insufferably spoiled princess? I submit the male thriller equivalent LIMITLESS, a decent enough flick, apart from the fact that you can't ever get on board with the fundamental premise because you can't imagine model-good-looking (and in fact, former model) Bradley Cooper having any IQ-limiting problems that his sly smile wouldn't instantly solve.

Finally, a bookmark for my "Point of View in Movies" folder!

Click on the "Books Vs. Movies" tag underneath the piece to see more of my thoughts on that subject.

I dunno, if you google image search Elizabeth Gilbert, you'll see that she's quite attractive, and I'm not sure that Toni Collette or Lily Taylor (both of whom tend to get "plain jane" roles) would have been any more sympathetic if they had gone on this particular journey.

Do you think graphic novels are also told in the "3rd" person? Unlike books that invite an intimate identification of the reader to the protagonist, comics are meant to be looked at, like movies. Maybe that's why Hollywood is using so many of them to make into TV shows and movies?

Comics are an interesting middle ground because of a few things:

1. Comics can get away with much heavier 1st person narration (in the form of captions) than movies, where the narration has to compete with the diagetic soundtrack.

2. Movies have a whole cast of actors making their own choices and trying to make their actors 3-dimensional, which make them inherently more objective than other art forms, as opposed to comics, where every character serves the creators' will.

3. Comics art is inherently expressionistic. The art in everything from Maus to Dick Tracy tends to exaggerate the characters point of view.

The abstraction of the bad behavior plays a big part in the impression it leaves. Kept abstract, a thoughtless or cruel act can easily be made non-offensive or even charming by avoiding detail. In prose, that’s easy. In a movie or teevee show, avoiding detail can take more effort and might not be possible.

Take comic book action sequences. The length of time that elapses between panels affects the degree of abstraction generated by the sequence. Consider that if the panels show only the Big Booms, the reader has to fill in the gaps between those panels while reading. Not that they actually do, but it keeps the action at a distance. We see it, but we aren’t in it. When a moment of ass-whuppery requires a greater sense of intensity, the time lost between panels shrinks. Instead of just the “whaboom,” we’ll see a windup and then the punch, or maybe a series of motions that could only happen in rapid succession, like three panels showing a rapid string of kung fu punches. This time compression means we can visualize the time between the panels easily, and as a result, we get more absorbed into the visceral effect of the action. We’re more “there.”

This isn’t always a good thing, of course. If a violent sequence is meant to be fun rather than terrifying, realism needs to be dialed down, because real violence is terrifying. Or if it’s the hero jacking up some random bad guy, we don’t want the brutality of the event to sink in with the reader too much, lest sympathy switch when we don’t want it to. Then, when the time comes to really pull the reader in, to make them feel the intensity of the action, switch to the shorter transition times, get that sweat-and-bad-breath feeling of immediacy.

A big part of the problem with “Eat Pray Love” is that there’s no way to abstract the protagonist’s bad behavior without pushing so far away that it turns into a comedy. Her bad behavior is intrinsic to the story. It’s easier to keep that at bay with prose.

Excellent point. John Rogers is both a comic book writer and a TV writer. In this post, I talk about his attempt to replicate a comic-book type effect in the opening moments of his TV show Leverage, which might have worked on a comics page, but just looks ghastly in live action:

Having been to India several times, I have a pretty negative reaction to the certain type of western spiritual-idealization of that country that appears in this trailer. I've always found something vaguely despicable about wealthy Americans and Europeans traipsing around a third-world country looking for enlightenment, then flying back to their first-world lives where they hope their time in India will help them with things like their relationships.

That being said, I think you've hit the nail on the head with why this could work on the page for me, but not the screen. Because even with my experience there, when I read a book about India it appears in my mind not as the country I've visited, but as a signifier of the idea of India. And I can see how this translates into all kinds of viewpoints/behavior in literature that won't necessarily work in film. It plays right into a lot of what I've learned from reading your blog about the inherent differences between film and literature, and this is coming from someone who has spent a significant amount of time studying both.

As for MISERY, I think there's an additional reason that the hobbling scene works better than the original (which I actually don't remember very distinctly from my reading to be honest)... the horror peaks in that scene during the anticipation of the violence. Something about the wood block, the realization of what she is about to do, the brute injury that is coming, his pleading... It's very traumatic. And visually distinct. And once the act is carried out the scene ends very quickly, if I remember correctly. I totally agree with what you say about the audience not being able to get over something like an amputation as well. There's a certain point, at least in my experience, when I can't get past an injury to a main character. Maybe it's a personal character flaw, but if something horrible and irreversible like an amputation happens to a character I just think "that's it, give up."

Except for Luke Skywalker, but he got a kick-ass new hand pretty quickly.

I'm catching up on a backlog here, so sorry for the late comment.

About that scene in Misery, I was a freshman in college when that movie was out, and I had a part time job at the nearby second run movie theater. When that movie showed, I learned that I loved the audible audience reactions to two scenes: the hobbling scene, and the scene where Caan finally gets his revenge. I would quietly crack the door on the theater and listen in on first the audience's gasps and groans, and then on their whoops and cheers. I can say from that experience that Reiner made a very good call.