In the comments to Tuesday’s post, J.S. had some interesting things to say about empathy, so I’ll interrupt our current project to follow-up: 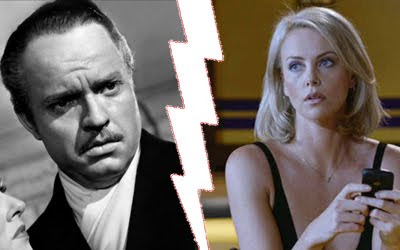 One of the most contentious questions in the world of screenwriting is this: Must a main character be sympathetic? Producers shout, “Yes!” and cite hundreds of failed movies about unsympathetic heroes to prove it. Screenwriters shout, “No!” and point to a small handful of movies that have succeeded despite this handicap.

The screenwriters are right: if they know exactly what they’re doing, then writers need not generate sympathy for their heroes. But there is one hard and fast rule: they must generate empathy…and to generate that empathy, they must feel it themselves.

No matter how unsympathetic characters’ actions are, there’s still a chance that we'll have empathy for their inner turmoil, but only if the authors genuinely feel that empathy themselves. On the other hand, if authors just want to condemn their own characters, we won’t care.

On Wednesday, I cited the examples of Citizen Kane, Psycho, and Notes on a Scandal. In each case, the writers asked us to have empathy without asking us to have any sympathy, and they pulled it off because they themselves felt empathy with no sympathy.

But far more common are movies like Young Adult: writer Diablo Cody was complimented by some critics for having the “daring” to make a movie with an unsympathetic heroine, but it would have been daring only if Cody had found a way to empathize with her unsympathetic heroine. Instead, she merely condemned the character, and it’s not hard to do that when you're the one who created her and her world.

One thing that the previous three movies do that Young Adult doesn’t is create the sense of an impossible situation. The characters all (irrationally) feel totally trapped by their life circumstances. (Of course, this is especially ironic with Welles’s Kane, who can go anywhere in the world except the one place he wants to go: back home)

The three characters cited above, on the other hand, are honestly trying to fill the hole in their lives, but they’re going about it the wrong way. We empathize with their honest need, but refuse to sympathize with their despicable attempts to satiate it.
Posted by Matt Bird at 6:00 PM

Though I haven't seen YOUNG ADULT what you write about it seems true. And I agree that if Diablo Cody doesn't care about her protagonist or can't relate to her dilemma then we're certainly not going to.

I suppose I was getting at something a little different. I'd put it more like this: "Suffering is not (necessarily) a story."

Which is to say that I do believe that writer-directors Steve McQueen and Mike Leigh care about and have deep empathy for their characters in SHAME and ANOTHER YEAR. But that this in itself is not enough. And that this is the kind of trap a writer can fall into when he/she starts with character, especially an extreme or troubled character on the fringes.

The McQueen film is about sex addiction, the Leigh film about chronic low-level depression. And, out of their empathy, the filmmakers arguably felt a duty to authentically capture the subjective feeling of these states of suffering. The narrative problem this creates is that, in the midst of a severe depression or powerful addiction, there's a horrible sameness and passivity to one's days. The characters are going nowhere and doing nothing about it.

And that's fundamentally at odds with the basic nature of narrative. It's only a story once somebody tries to do something about it. Until then, at best, it's a character sketch.

I've only read YOUNG ADULT and SHAME but in reading both, felt that empathy could only be generated by understanding why each character became so dysfunctional.

In YA, the heroine seems to have full blown narcissistic personality disorder, or at the very least, many personal defects along the narcissism spectrum. Most narcissists become this way due to growing up in a dysfunctional home with inadequate parenting. This was hinted at in the script I read but never really revealed as the true cause of the heroine's problems. A scene or two with a therapist would have, IMO, helped to understand the heroine's issues and how/why she needed to get help.

With SHAME, again, in the script I read, it was hinted that the hero and his sister were sexually molested by their father. This helped to explain his sex addiction and his avoidance at feeling any shame. From what I've heard about the actual film, there is no explanation for his sex addiction so it's hard to garner any empathy for him. When I read what his father had done, I really did feel for him and wanted him to get some help.

So, what I'm attempting to say here is that I believe it's impossible to feel empathy without an understanding of how that character came to be the way he or she is.

I have to disagree with Jill, at least about SHAME. That little tidbit of backstory doesn't help me. And I think it's wrong to assume that psychological explanations or past accounts of suffering suffice to justify a character's present course of (in)action or to somehow further endear him/her to the audience.

I've seen a number of good films about characters much worse off than the ones we've been talking about -- desperate, flailing, actively suicidal -- and what makes those films good isn't the backstory but the actions the characters take toward solving their problems in the present moment -- even if they turn out to be all the wrong actions, which will ultimately result in the most tragic of outcomes.

Or to put it another way, it doesn't matter what's been done or left undone to them: People in movies still have to DO stuff.

If YOUNG ADULT is actually about narcissism, then I see why it's having such a difficult time with audiences. It seems like the only way we can relate to these kinds of characters is to pit them against much larger forces, as Matt explored with films like NIXON, SALVADOR and DOWNHILL RACER in "Jerk Week." Nobody wants to see a narcissist bumbling through his/her everyday life.

Clinical narcissism -- functionally at least, for storytelling purposes -- is very close to out-and-out psychopathy in that it's a disorder of extreme selfishness and callous disregard for others. As I mentioned before talking about DEXTER, it's hard to create an accurate and honest depiction of a psychopath who is in any way relatable. Because by definition naracissists and psychopaths are at the extreme and opposite edge of the empathy scale from the rest of us.

I agree. "Young Adult" has one great scene that almost saves the movie: Theron visits her parents and casually-but-carefully mentions that she thinks she's become an alcoholic. Her mom, played by Jill Eickenberry, pretends she's joking, cheerily responds "That's hilarious" and politely changes the subject. So we can see (too late in the movie) why she's this way, but we don't don't feel it.

Simply showing us a glimpse of the bad parent in order to quickly explain the bad behavior is not enough. (See also: Big Fan, The Aviator, J. Edgar) It's intellectually satisfying ("I see what the problem is") but not emotionally satisfying ("I feel this pain")

Instead, in order to feel empathy, we must have a sense that the bad parent has a powerful grip on the hero that has warped their life, no matter how they try to escape it (The Sopranos, Kind Hearts and Coronets, Citizen Kane, Psycho)

("Downhill Racer" and "Nixon" lie in an interesting middle ground: both could be considered examples of "one quick glimpse of the bad parent to explain the problem", but in these cases, it works because the parent is only one cause of the problem. Both of those movies were made to condemn the culture of corruption the hero plunged into: sports and politics, respectively. In each case the bad parent merely tips them over the edge, creating an antihero even more sociopathic than the others around him.)

Ha! J.S. and I left those comments at the same time (yes, we both independently brought up "Nixon" and "Downhill Racer"!), so when I said "I agree" above, I was actually referring to Jill's comment, but it seems to me that we're all basically coming to the same conclusions from different angles.

Yeah, definitely, you both bring up strong points on the "how to empathize" -- can't just provide explanation but must also see the hero/heroine actively trying to break free from the source of dysfunction, which is incredibly difficult with characters who have personality disorders and/or lack the ability themselves to feel empathy.

I'm not sure what Steve McQueen's goal was with Shame? I heard him invu'd on a radio station during the TIFF and I didn't get the sense that he cared so much about his hero arcing in any way. It seemed rather that his intent was to shine a light on this "dirty little secret".

As for YA, again, I'm unclear what Diablo Cody's goal was with her heroine. Her character certainly didn't garner any empathy, and people with extreme narcissism tend not to change because they refuse to accept responsibility for their behavior.

The lesson I'm taking from all this is to avoid writing my hero/heroines with these types of personalities because as you've both pointed out, it's really difficult (and a tad depressing) to tap into empathy.

Narcissists can be quite compelling as protagonists in the right circumstances. In brutally competitive environments like big business, politics, warfare and professional sports, what would be seen as callousness in other contexts can play out as single-minded focus on the task at hand.

Matt already mentioned a number of these characters above and I'd add names like Gordon Gekko and General George Patton. The narcissist's expansive ego can allow him/her to make visionary creative leaps (Mishima, Jim Morrison).

Though I doubt I'd want to see a sitcom about the home life of any of these people.

I'd say one rule that's becoming pretty clear is: Don't write a film/TV story about a narcissistic protagonist that focuses only or mostly on his/her personality and relationship problems.

Such a story could work better in a novel, especially one in which the narcissist was a first-person narrator. Trying to read through their unreliable narration would be much more interesting than watching them misjudge reality from a more objective point of view.