How to Generate a Story Idea, Option 6: Start with an Image 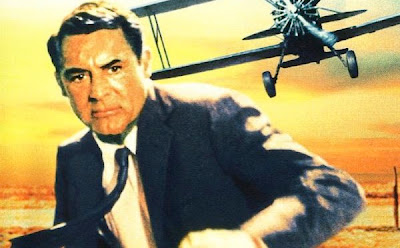 A man waiting at a lonely crossroads suddenly realizes that a cropduster pilot is plunging down towards him with death in his eyes. Why? A house lifts up out of the city, carried aloft by thousands of helium balloons. Who’s in it? Where’s it going? 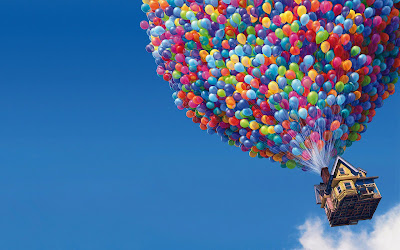 This is one of the most exciting but dangerous ways to generate an idea. You’re essentially starting with the poster: an arresting image that would make anybody want to see more. All that you’re missing is characters and a plot and a theme. The danger, of course, is that once your hero comes to life, he’ll think of easier ways to get down to the Amazon. If you start in the middle, there’s no guarantee that your hero will want to get there.

I’ve had an image in my head for a while: a horde of Tyrannosauruses rampaging down the streets of modern day New York. How did they get there? And who will discover the cause of the problem? And why will the audience love that character? And what does any of this have to do with any genuine emotion of mine? Most importantly, what is the metaphor here? The image gives me none of this. It’s just a great poster. 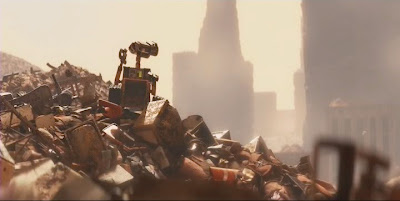 Pixar is especially good at this. I would imagine that most of their movies began with an image (toys coming to life, a mouse-chef in a human kitchen, a ruined planet covered in trash), but they don’t move forward until they’ve connected those concepts to very universal emotions.

I have successfully driven myself completely insane with this method. See, I had this idea that you'd start with an extreme and fictional event, and then figure out what honest human emotions would arise out of it, and go from there. Create humanity and rich textures in the midst of nifty sci-fi chaos by making it as real as possible.

Unfortunately, since the initial event was fictional, it didn't have the hard boundaries reality provides, which meant that "real human reactions" I wanted could be gamed too easily into the themes my subconscious adores and tends to work with in stupidly broad strokes, and...oh, it's too depressing to think about.

As you say, this approach can work. It's just more difficult than most.

I'd say if you can't think this way at least part of the time, consider writing novels or plays instead. Because it's hard for me to imagine the vast majority of high concept film and TV shows getting made without these kind of hooks. And if you're lucky enough to be out pitching for open writing assignments, it will often be this brand of imagistic and big moment sizzle that sells your steak.

I believe that Hitchcock started NORTH BY NORTHWEST with the image of the climactic struggle on Mount Rushmore. The cropduster sequence came later. But connecting all those dots and figuring out how his characters got there was why he hired screenwriter Ernest Lehman.

Matt's right to highlight Pixar for their ability to effortlessly graft human emotion onto the highest concepts. Is what they do really all that different from the process of creating any good live-action blockbuster? Look at what Matt's been writing about RISE OF THE PLANET OF THE APES, for instance.

As for Mr. Jerkwater's problem, I wonder if he maybe hasn't found the right historical analogue to his imaginary sci-fi event. There are few successful stories in the history of the genre that don't owe much of their underlying structure to some basis in real prior conflicts.

According to Stephen King, this is his favorite method for creating story ideas. It's worked well forme as well - even if the image i start with doesn't actually make it into the final piece, it's a great way to start ideas rolling

Atmospheric setting photos in google images has helped me as writing practice, perhaps a chapter, but not towards finding a brand slnew sparky idea for more than a short story as yet