How to Generate a Story Idea, Option 8: Flip Another Movie’s Genre

In order to sell a pitch, you need a catchy logline. My latest script, which I’m getting notes on today, couldn’t have been more simple: “The thriller version of [a well-known comedy]”. (I’m not at liberty to say which yet, but it’s one of the movies in the list at right.) Once I said that, everybody could instantly see the appeal.

This has been done a lot over the years: Throw Momma From the Train is explicitly the comedy version of Strangers on a Train. The recent spec sale From Mia With Love is basically the comedic version of the dreadful Nicole Kidman thriller Birthday Girl. A movie I mentioned yesterday, Chronicle, could be called the thriller version of Zapped.Here’s the zany action-comedy version of Taken:

A divorced CIA agent, who is convinced that Europe is a cesspool, can’t reach his daughter in France on the phone, so he rampages across the continent trying to get her back, while she constantly tries to ditch him. Along the way, his hysterical fears of Muslims are turned on their head when he gets mixed up with a beautiful French-Socialist-Muslim lady-spy. Meanwhile, his daughter, looking to borrow money, pays a surprise visit to his ex-partner, only to stumble onto the fact that he’s now an illegal gun runner. Now the dad and the French spy have to team up to save his daughter after all, unexpectedly falling in love along the way!Here’s the thriller version of The Hangover: 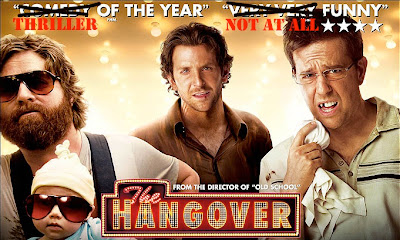 The introverted brother-of-the-bride is reluctantly invited along on a wild Vegas bachelor party by the groom and his friends. These guys turn out to be corrupt cops by day and drug dealers by night. When they run into rivals in the midst of the party, things get violent. The brother-in-law has seen too much, so they inject him with something that wipes out his short-term memory and leave him at the scene to take the rap. …But he wakes up early, avoids the manhunt that’s looking for him and searches the city for clues as to what happened in the missing hours, so that he can clear his name and nail the real killers...

These things write themselves!

I understood this idea intellectually but I think I finally got it on a deeper level when I caught a little film noir by Richard Quine called PUSHOVER and had a sudden realization that the situation and mechanics of this tight little thriller -- lots of characters keeping big secrets from each other, misunderstanding other characters they're observing and having all manner of suspenseful near misses -- was oh so close to farce. Nearly the same story with the same characters and situations could become a comedy if you changed the ending, downshifted the stakes a bit and tweaked the tone slightly.

This kind of thinking is just gold for the writerly imagination. It's the reason why the very best writers like Billy Wilder can move so fluidly from comedy to drama and every step in between.

And it doesn't only work for existing movies, but for ones that are in your head too. If you're stuck on an original idea that's just not working out, try flipping the genre on that and see what happens.

This is how we have DR. STRANGELOVE, one of the greatest comedies of all time, instead of just another apocalyptic Stanley Kubrick thriller (which admittedly would have been pretty great too).

Some thoughts: Both "The Three Amigos" and "A Bug's Life" are the comedy versions of "The Magnificent Seven" (strangely enough with the exact same twist in both -- stranger still that the source material was itself the Western version of "The Seven Samurai").

I'm also reminded of "Forgetting Sarah Marshall" where Jason Segal's Dracula muppet musical is laughable as a tragic thriller, but finally wins him success, fulfillment, and the girl as a comedy.

I like everything Steve's said. I can go him one step further on THE SEVEN SAMURAI, which Kurosawa has often said was inspired in part by his love of American Westerns, particularly the films of John Ford.

So this should be a wake-up call too, to all would-be writers who think they only care about one or two genres or kinds of movies (or even forms of storytelling). If you act as if that's the case, you're severely limiting your the potential inputs on your imagination. Go ahead and be the horror writer who believes he could care less about art movies like THE VIRGIN SPRING. The Wes Cravens of the world will be out there making it while you proceed to imitate stories from a much narrower field.

This all puts me in mind of Jonathan Lethem's excellent essay "The Ecstasy of Influence" and of the supercool web video series inspired by it and other things called EVERYTHING IS A REMIX.

I'm with the Kristen Wig Bjork from last week's SNL who said this was the key to her creative process: "You take something you love and turn it into something else."

I love "Everything is a Remix"! Everyone should check that out if you haven't already.