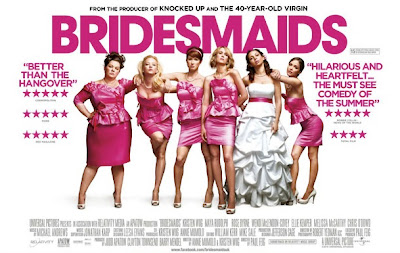 The Story: Like you don’t know! Broke former bakery-owner Kristin Wiig signs up to be the maid of honor for her best friend, Maya Rudolph, but can’t compete with a wealthy fellow bridesmaid who schemes to take over the planning. A series of meltdowns finally convinces Wiig that she has to get her life back on track.

Why This One: I haven’t watched SNL in years, but after I saw Wiig in two scenes in Knocked Up, I thought, “Wow, she could go far.” How nice that things actually worked out that way! Co-writing with Annie Mumolo under the direction of Paul Feig, Wiig created a shockingly authentic character in the middle of a broadly farcical plot.

Labels: Best of 2011, Best of the Year, Bridesmaids

This is an amazing post I seen on account of offer it. It is genuinely what I expected to see trust in future you will continue in sharing such an awesome post. read more

Hey buddies, such a marvelous blog you have made I’m surprised to read such informative stuf
123movies

basement to play with his dad’s childhood legos. Lord Business, voiced by Will Ferrell, is the embodiment of the boy’s dad,
123movie

I’m flattened by your contents keep up the excellent work. 123movies.fun

At the opposite end of the scale to the blockbuster, there is the independent, art, or Indie movie. watch free movies online on 123movies

He proposed that DC Films differentiate its slate from the competing Marvel Studios' by producing low-budget, standalone films.[42][43] After the successful release of Wonder Woman (2017), DC Films decided to deemphasize the shared nature of its DC-based film franchise, the DC Extended Universe (DCEU). 123 movies

Jensen makes amends and gives the layout of Garza's palace. Ross boards the plane with Yang and finds the rest of the team waiting. yes movies

Thankfully, the AFI's new list-o-rama is typically contestable, as its broken things down to 10 individual Top 10 lists in a variety of genres. One could certainly get plenty irked by the choice of genres, but they categorization within each genre and then by the actual selections. Then there are all of the usual AFI problems about lamentably absent older films, lamentably absent recent films and the weird definitions of what constitutes an "American" film anyway. Go123Movies