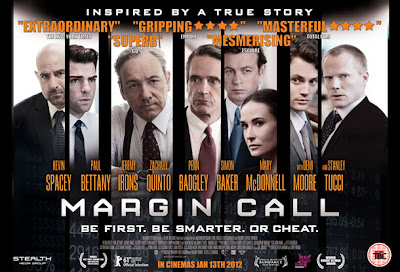 The Story: Zach Quinto and Penn Badgley are minor analysts in a massive Wall Street firm. They survive a mass purge that claims their boss, Stanley Tucci, only to discover that he left behind a new risk-model that shows that the company is about to implode. They run this news up the chain of command, which causes their bosses to consider an apocalyptic option: trick their own clients into buying all of the firm’s toxic waste.

Why This One: When I read this script I thought it would be too talky and uneventful to work as a movie. What I wasn’t taking into account was debut writer/director J.C. Chandor’s ability to impart all that talk with a compellingly eerie sense of gravity, making this the best straight-up drama of the year.

The Rules it Drove Home:

The time has come for me to ask what you mean by "ironic".

To me, it has to do with something one set of people understands (the audience) and not another set (one or more of the characters). But in this case (and others) you seem to use it to mean "unexpected" or "incongruous" or something like that.

I use "irony" to refer to any substantial gap between expectation and reality.

When we meet a wall street trader, we expect them to have a financial background, not a physics background. In this case, the irony goes deeper: Quinto, in college, expected to rocket America up to the heavens, but he wound up using the same skills to sink America's economy down a bottomless pit.

I'll have a follow-up post next week on six different types of irony storytellers can use.

Okay, so from now on I'm going to start referring to "Air Bud" as the most ironic movie ever made, since a dog playing basketball is a clear abuse of reality.

Honestly, I think the problem with the way that you break it down is that it depends on perspective. I've known for a long time that NASA-bound intellects were being siphoned off to Wall St. So this is actually mundane (to me).

The tension of Michael Corleone's gun in the bathroom is equally tense to all of us because
1. We know that he's got it.
2. We know that the other two don't know.

I'm not being pedantic (at least I think I'm not...). I think creating a backstory that has an interesting resonance with the current story is one tool; irony is a different tool. I don't think anyone benefits by blending them.

I just saw your comment about your upcoming posts. I'm looking forward to it!

Hi, I am pleased to follow your website and get these all useful posts. Thank you so much and for you all the best. That is a great job.
fmovies