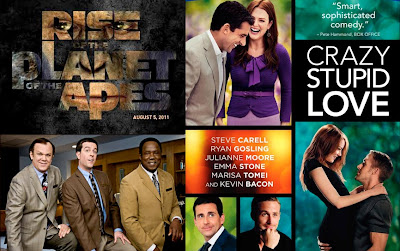 Hey, why am I rushing through this? Because my #3 and #2 favorite Hollywood movies of last year are both movies I’ve already covered extensively. #3: Cedar Rapids was an underrated movie, and #2: Rise of the Planet of the Apes was the topic of a whole week of Storyteller’s Rulebook posts: Is there anything left to say? Nope! Let’s move on to #1: Crazy Stupid Love

The Story: When a disappointed wife (Julianne Moore) requests a divorce from her listsless husband (Steve Carrell), he seeks out the help of a local lothario (Ryan Gosling) to re-awaken his manhood, but just as Carell discovers his wild side, Gosling suddenly feels an urge to settle down with a straight-laced young lawyer (Emma Stone).

Why This One: Was this my favorite movie of the year? No, that was probably The Artist, but it was my favorite home-grown movie because, on a nuts-and-bolts level –-the scenework, the dialogue, the characterization–- it was so elegantly put together. It’s a master class in heartfelt writing, which is something Hollywood doesn’t know how to do anymore. Co-directors Glenn Ficarra and John Requa knew a good thing when they saw it, so they shot Dan Fogelberg’s screenplay exactly as it was on the page

Rules It Drove Home:
Posted by Matt Bird at 6:30 PM

It's really that good? And I ask that as someone who watched a double feature of ANNIE HALL and MANHATTAN last night and is glad his s.o. doesn't read this blog ( she's been wanting to see this).

Also I take it you haven't yet seen TINKER TAILOR or TAKE SHELTER and/or don't consider them Hollywood movies even though MARGIN CALL is?

I finally saw Tinker Tailor and liked it a lot, but yeah, there were no Americans involved, so I didn't really consider it for this list. I never did catch Take Shelter" but I would consider that to be more indie than Margin Call, certainly, just in terms of the cast, if nothing else. I should really see it, though.

Crazy Stupid Love is no Annie Hall, certainly, and I'm probably doing it no favors by praising it so highly, since much of its charm comes from its modest tone. This is the sort of movie Hollywood should be able to make in its sleep, but it can't anymore, so I'm always especially impressed whenever anyone captures that old-fashioned effervescence.

I guess if I think of "best" as "has something to teach us about writing-est" it makes more sense.

There's no way you'd put THE TREE OF LIFE on your list, even if it was the best film you'd seen last year, because what it has to teach is all about directing and next to nothing about writing stories.

I have to say that CRAZY STUPID LOVE really is a hard sell for me, even with your highest recommendation. If it is intelligently constructed, it still looks like just another charming hugs-and-learning dramedy for the NPR set. I guess I'm especially skeptical when I see anything touted as the next best thing in romcoms. Because just about every romantic comedy made nowadays is really just a lightly comedic (and usually not very funny) romance (which is usually not very romantic or true to human nature). A movie like BRIDESMAIDS at least had the good sense to be funny the whole way through.

The "people want what they want" thing is what made me think of Woody Allen. Who does that better than he does? It's more or less what he said when he scandalized his own life too: "The heart wants what it wants."