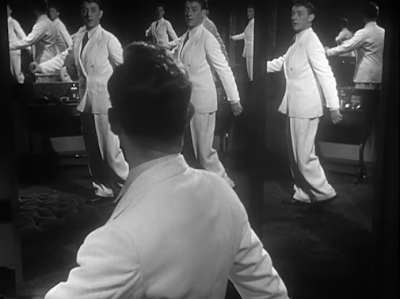 On Sunday, we discussed The Man in the White Suit, by writer-director Alexander Mackendrick. He later became a revered film professor, and published a great book called “On Filmmaking.” Commenter J.S. found a list of 41 Mackendrick truisms online, so I
’
ll spend a few days discussing how these rules line up to what I
’ve said here before...
1. Movies SHOW ... and then TELL. A true movie is likely to be 60% to 80% comprehensible if the dialogue is in a foreign language.

2. PROPS are the director's key to the design of 'incidental business': unspoken suggestions for behavior that can prevent 'theatricality'.

3. A character in isolation is hard to make dramatic. Drama usually involves CONFLICT. If the conflict is internal, then the dramatist needs to personify it through the clash with other individuals.

4. Self pity in a character does not evoke sympathy.

5. BEWARE OF SYMPATHY between characters. That is the END of drama.

6. BEWARE OF FLASHBACKS, DREAM SEQUENCES and VISIONS. In narrative/dramatic material these tend to weaken the dramatic tension. They are more suited to 'lyric' material.

8. Screenplays come in three sizes: LONG, TOO LONG and MUCH TOO LONG.

10. If it can be cut out, then CUT IT OUT. Everything non-essential that you can eliminate strengthens what's left.

My art teacher used to tell us "When in doubt, leave it out." (This was in a course in Drawing Flowers in Colored Pencil.)

re: film length and shorts. Ever seen Madagascar's Penguin's Christmas? It's about 11 min and absolutely brilliant, IMHO. Every line and scene...my 3 yr. old laughs his ass off, as do I.

I haven't. My daughter is going to enter the movie-watching age in a year or two, so I'm sure I'll see everything animated soon. Shorts based on features have a much easier job, of course, because we already care about the characters.

This is true -- everybody loves those penguins so they already had a captive audience.

The new film of TINKER TAILOR SOLDIER SPY is like a case study in applying these rules, especially 2 and 6. I'm hugely impressed by the ruthless economy of the storytelling and the ways the writers and director found to translate a complex literary narrative into something that works in the cinema -- especially the moments when they decided to pull back a bit and go against the rules.

About the economy of animation, especially the really good stuff like old Looney Tunes and the Pixar films: a big part of it, is, I think that they have to do everything from scratch. You'd think live action writer/directors would have a little more respect for the time and talent of their real humans cast & crew and that would be enough to shame or scare most of them into telling better stories, but there's something about the process of starting with nothing, not even real actors in front of a green screen -- but the void itself and making up every last detail that seems to impress upon animators a certain economy of expression.

Very much looking forward to seeing Tinker Tailor Soldier Spy. My husband read the book some time ago so I'll be interested to hear his take on the novel-to-script transition.

re: animation. I watch A LOT of pixar and dreamworks movies because I have kids, and I am amazed every time how perfectly executed these films are. Every scene and line is tied into theme and character. I mean EVERY word, it is so precise. Those films really apply the rules.