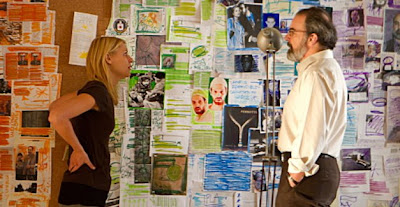 A final round-up of Alexander Mackendrick’s fantastic rules for writing. For more of his wisdom, buy his book “On Film-Making”.

32. A SHOOTING SCRIPT IS NOT A SCREENPLAY. The beginning screenwriter should be discouraged from trying to invent stories in screenplay format.

33. A FOIL CHARACTER is a figure invented to ask the questions to which the audience want answers (asking the question may be more important than having the answer).

34. NEGATIVE ACTION (something not happening) needs to be dramatised in positive action terms. You show something starting to happen which then is stopped.

35. TWO ELEMENTS OF SUSPENSE ARE HALF AS SUSPENSEFUL AS ONE. Aristotle's principle of unity means that one dramatic tension should dominate. All others are subordinate to it.

36. CONFRONTATION SCENE is the obligatory scene that the audience feel they have been promised and the absence of which may reasonably be disappointing.

41. Every character is important.
Posted by Matt Bird at 7:03 PM

On rule 33: I've always understood a foil to be not just a stand-in for the audience but also a living embodiment of different choices the protagonist might have made (more in line with rule 41).

On rule 39: I'd like this one better if it were adjusted slightly to "Never cast for physical attributes alone." After all, what you're talking about when you reference THE GRADUATE and CAUGHT isn't the way that the directors ignored physical attributes, but the way they created tension and reversed expectations by casting leads for their non-obvious or non-traditional looks.

Some stories have more leeway than others. Michael Keaton was a plausible Batman, but I doubt anyone less then traditionally hunky could be Superman. Or can you really picture a homely Don Draper?

And let's not forget that one important physical attribute (that has nothing to do with conventional good looks) in a large ensemble cast is simply not looking like anyone else in the cast.

[I might as well make it a clean sweep and pause here to invoke the new TINKER TAILOR once again to say how perfectly cast everyone in this film is. They all look exactly as they should and distinctly different from everyone else.]

On rule 41: There's another way to take this, which always makes me think of a particular moment in DOUBLE INDEMNITY, where Stanwyck and MacMurry are having a clandestine meeting in a supermarket and along comes a woman who happens to want a can of soup that's right behind them. For a moment, this bit player unwittingly brings the conspirators' big plot to a screeching halt -- but she doesn't know that or care. She just really wants her soup. So I'd say that for me, rule 41 also means "Every character in your movie is, in their mind, the hero of their own movie. Every character should want something and therefore be as respected and as real as all the others."

As for casting different looking people: I've seen Stardust Memories three times, and I love it, but each time I got confused and thought that Charlotte Rampling and Marie-Christine Barrault were the same person, greatly confusing things. The second two times I watched it, I kept reminding myself to keep track of who was who, but I couldn't--they just looked too similar.

As for casting for qualities, I don't know... I made a movie about a Don-Draper-like character, so I thought I had to find a really handsome guy. In auditions, we had one guy who looked just right but didn't blow me away, and another guy who blew me away but looked schlubby. I cast the handsome guy and gave the schlubby guy a smaller part, but every damn time I watch the movie, I wish I had cast the schlub as the handsome lead, simply because a great actor can pull off any part.

I had to think about that for awhile to see if I agreed or not. After some thought, I agree and disagree. I do think it's possible to still root for an unlikable hero IF you've addressed other elements in your story such as the hero's backstory and villain (my husband cited UNFORGIVEN)or have made him funny (GROUNDHOG DAY).

In Unforgiven, we don't know right away that Clint's character used to be an evil badass. At first he seems rather reluctant to kill the bad guys who cut up the prostitute. He really doesn't want to go back to that life. But then we learn what they did to his buddy, played by Morgan Freeman and there's the motivation plus these bad guys are much more evil than him (now anyway, perhaps not before he changed his ways as we learned from his backstory). His badassery comes out full swing, he's highly motivated and it's him against the sheriff and a bunch of his bad guy friends. Thus, he's earned the trust and respect of the audience.

As for Groundhog Day, Bill Murray's character is a jerk but he's funny so I think as the audience, he's forgiven for a lot as humor goes a long way, at least I think so. He seems to be quite passive in the beginning, less so as the story progresses and as the audience, we WANT him to change because, not only do want to stop listening to those two annoying radio hosts in the morning, but we'd like to see this jerk actually become a better person.

To sum up, and I don't know if I've made my points clear, making any sort of hero someone the reader will root for depends on a lot of factors that need to be balanced precisely to produce the desired outcome.

I wrestled with that issue throughout all thirty parts of
The Hero Project, Jill. The best I was able to come up with was that you have to discover the correct bad-ass/vulnerability ratio.