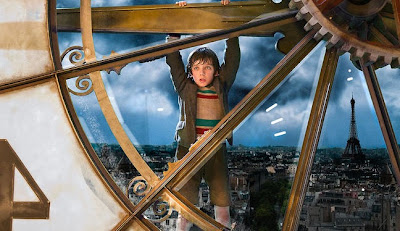 Genuine conflict occurs when a character doesn’t want to do something, for reasons such as these:
Obstacles, on the other hand, are external problems that the hero can tackle without facing any internal doubts. Hugo encounters lots of obstacles: a train station guard he has to avoid, an old man who won’t give him what he wants, a living situation he has to hide... But he’s not reluctant to deal with any of them.
He does have a “want”, but it’s very vague: For some reason, he thinks that if he repairs an automaton, it will write out a message from his dad, but why does he think this? His dad told him outright that he just found the old automaton somewhere and he has no idea what it will say if they get it working. What part of that did Hugo not understand? 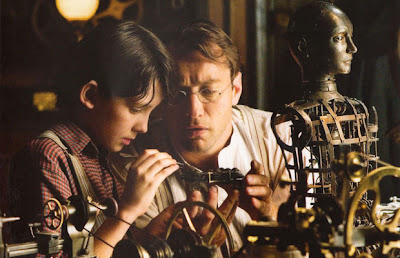 Not only does this make Hugo’s quest nonsensical, it makes his inability to spot other clues exasperating: every piece of evidence indicates that the automaton is the lost property of the man who runs the gadget shop, but it takes Hugo forever to accept that this might be true.
If I may slip into Meddler mode, the fix for Hugo seems fairly obvious to me: combine two flat characters, Hugo’s beloved dad and his rotten uncle (who both die mysterious deaths), into one complex character.
In this version, Hugo’s loving but ne’erdowell dad, who maintains the clocks in the railway station with his son, would discover the automaton and bring it home to Hugo, claiming he made it himself. When Hugo realizes what the gears used to do and asks what it writes, the dad quickly covers for his lie by saying that it’s a mystery he wants Hugo to solve.
This way, after the dad disappears (drunk in the river, we eventually find out) Hugo has every reason to assume that the automaton will contain a message from his dad, and every reason to get upset when the evidence starts to indicate that the automaton must actually belong to the old man.
Also, this way, Hugo’s surrendering of the automaton to the old man is a painful decision, and it requires him to admit the truth about his father. By recognizing and alleviating the old man’s bitterness, he gains insight into his father’s own failures, ironically fulfilling his original goal of understanding his father.
This change would not only strengthen Hugo’s motivation, it would turn external obstacles into internal conflicts. Hugo’s tasks would not only be hard to do, but hard to want to do.
Posted by Matt Bird at 9:34 PM

The film didn't really come alive for me until the Melies flashbacks and now I know why.

Um, wow. I no longer feel compelled to read Hugo Caberet. But I agree with you that Wonderstruck was amazing. How long before they make that into a movie?

You should still read Hugo Cabret, the art alone would be worth it. Wonderstruck, more than Cabret, would be in danger of losing a lot on the way to the screen, but maybe a skilled adapter could pull it off.

I haven't seen this movie yet (and I might have just spoiled it by reading this), but you just nailed what I thought I saw in the TRAILER. That was, a kid running around an "obstacle course" train station, being chased by some blundering guy in a suit.

I couldn't spot any conflict...what was the movie about?

No one could really tell me, even after having seen it, so I passed. Now, I know why it looked like an obstacle course--because it was. Nice.

Great thoughts. My husband and I saw this film and I have to say I was disappointed. It was a beautiful film of course, but I just couldn't quite see what all the fuss was about. I had a very hard time relating to the characters, and like j.s., the parts I found most compelling were the Melies flashbacks. A good conflict would have done the entire movie good and kept my interest up.

Wow. I don't think I even realized why that film was so unsatisfying until this moment. Thanks. I'd much rather have seen your version.