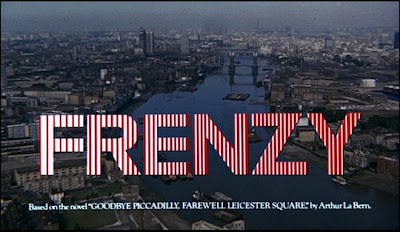 More of the rock-solid wisdom of Alexander Mackendrick...

22. DRAMATIC IRONY: a situation where one or more of the characters on the screen is ignorant of the circumstances known to us in the audience.

23. If you have a Beginning but you don't yet have an end, then you're mistaken. You don't have the right Beginning.

24. In movies, what is SAID may make little impression - unless it comes as a comment or explanation of what we have seen happening.

25. What is happening NOW is apt to be less dramatically interesting than what may or may not HAPPEN NEXT.

26. What happens just before the END of your story defines the CENTRAL THEME, the SPINE of the plot, the POINT OF VIEW and the best POINT OF ATTACK.

27. Make sure you've chosen the correct point of attack. Common flaw: tension begins to grip too late. Perhaps the story has to start at a later point and earlier action should be 'fed in' during later sequences.

28. What happens at the end may often be both a surprise to the audience and the author and at the same time, in retrospect, absolutely inevitable.

29. Character progression: when you've thought out what kind of character your protagonist will be at the end, start him or her as the opposite kind of person at the beginning, e.g. Oedipus who starts out arrogant and ends up humiliated, Hamlet who is indecisive at the start and ends up heroic.

30. Most stories with a strong plot are built on the tension of CAUSE AND EFFECT. Each incident is like a domino that topples forward to collide with the next in a sequence which holds the audience in a grip of anticipation. 'So, what happens next?' Each scene presents a small crisis that as it is revolved produces a new uncertainty.

31. DRAMA IS EXPECTATION MINGLED WITH UNCERTAINTY.

I agree that going all-in on "information superior" positions can be tricky, but to sprinkle a little bit here and there at key moments throughout many stories really increases the quotient of suspense. If you alter Mackendrick's rule ever so slightly to "...ignorant of some of the circumstances..." then it might be more useful and it might speak more to the way dramatic irony can feed into rule 31, that lovely definition of drama as "expectation mingled with uncertainty."

I'd say there are moments in most really excellent thrillers like Hitchcock films other than FRENZY, BREAKING BAD and the new TINKER TAILOR SOLDIER SPY where the audience knows more than some of the characters for some of the time. And when I'm watching a great story unfold and it momentarily shifts me into an information superior position, I feel like it only ratchets up my interest in what's going to happen next.

Once again I'm compelled to say I'm very grateful for this blog and the meticulous commentary and careful hyperlinking that Matt offers in all his posts. I'm a huge fan of posts like this that organize, reference and build upon many other posts so that we can learn and relearn these rules, think them through different stories and push them up against one another.

These are great, keep 'em coming! Great reminders of things I tend to forget.

28 is my favorite. The reader or the audience has to gasp at the ending, while recognizing that the ending is absolutely inevitable in terms of what has gone before.

The real test: Whether the audience still gasps after the third or forth viewing.