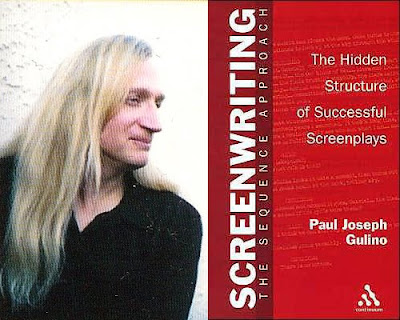 
The History: Frank Daniel was a Czech film producer who emigrated to America in 1969, then taught screenwriting at three of the country’s biggest film schools: AFI, Columbia, and USC. At each school he preached the “sequence approach”. He never published these ideas in a book, but instructors at these schools spread the word. Finally, in 2004, one of his protégées, Paul Joseph Gulino, published a book that summarized Daniel’s approach.

Thing that Makes You Want to Reject the Book Outright: Well, before you read a word, there’s Gulino’s author photo (above), which is exactly what you fear a guru will look like.
Areas Where It’s Less Than Helpful:
Useful Wisdom:
Posted by Matt Bird at 10:15 PM

The number one most useful thing to me about this approach it that it breaks the story into smaller, somewhat discrete, and therefore more approachable units.

I also like the idea, presented in the book, of looking at each sequence as a separate mini-movie with its own protagonist/antagonist/goal which may not necessarily reflect the film's overall hero/villain/objective. This way of thinking about movie stories seems especially relevant when you're dealing with large ensembles, epic scope and/or historical figures, where there might be large chunks of story during which the main character may not be strictly driving the action. (See the book's analysis of LAWRENCE OF ARABIA, for instance.)

Thinking about your story in sequences also forces you, when you're writing genre fare, to pony up and deliver the goods -- whether it be action set pieces, horror chills/kills, etc. It's the only structural approach that has the every 8-10 minute rhythm of genre payoffs built into it. Consciously designed this way or not, THE DARK KNIGHT is a pretty good example of what I'm talking about.

I've heard filmmakers like Quentin Tarantino say "All you need to make a movie are eight great scenes." Change that to sequences and he's just about right.

Matt's certainly correct about the potential pitfalls of writing something too episodic. So I'd say it's best to use the sequence approach in tandem with other structural systems that have a clearer line of rising action throughout the larger story.

Or think of it this way: If the other structure gurus are about strategy (the war), then Daniel/Gulino are about tactics (the battles). Do whatever you have to do to win the battles as long as you don't, in so doing, lose the war.

Valuable info. Lucky me I found your site by accident, and I'm shocked why this accident did not happened earlier! I bookmarked it. web development services singapore

I’d should check with you here. Which isn't something I normally do! I get pleasure from reading a post that will make individuals think. Additionally, thanks for permitting me to remark! 个人陈述