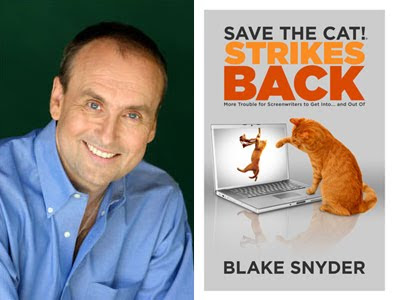 The Guru: Blake Snyder
The Book: “Save the Cat!” and “Save the Cat Strikes Back”
The Year: 2005 and 2009
The History: Unlike most of the others on this list, Snyder actually wrote a few theatrically released movies, but the only one you’ll remember is, alas, Stop or My Mom Will Shoot! After his career petered out, he wrote a slim screenwriting book that became wildly popular. His follow-up book turned him into a full-fledged guru by laying out his version of structure, but he didn’t live see it published, dying suddenly at age 51.

Outrageous Statement that Makes You Want to Reject the Book Outright: “Existential dilemmas are what close on Saturday night, as the low-performing art house gem Memento proves. Gimmick or really dull movie? You decide.”

As far as gurus go, Blake Snyder has been the most helpful to me, hands-down. For some reason, when reading him, I would become actively inspired, and scenes and dialogue would spontaneously start zinging around my head. That never happened to me with any other guru.

Somehow his chatty, philistine, oblivious tone ("arrogant" doesn't capture it; on the contrary, he seemed rather too unpretentious) worked for me. It constructively alienated me from him enough that I felt didn't have to take his advice too seriously. Paradoxically, that caused me to lower my guard, and I learned more. Wait, didn't Yoda use a similar trick with Luke in ESB? Snyder has been playing with us all.

I agree with you, that Memento quote is seven kinds of wrong. For some reason, it's one of the first things that pops into my head whenever I think of Save the Cat.

Anyway, he seemed like a lovely guy. I loved how relentlessly positive he was. I will miss Blake Snyder.

And as long as I have your ear, I hope you haven't given up on the "First Fifteen Minutes" project. I found that extremely helpful and interesting.

I was actually surprised, after Reading Save the Cat, that so many people were put off by his tone. I think sometimes I enjoy being talked down to. Funny enough, it makes me feel like I'm learning. Either that, or his tone was nothing compared to Chuck Wendig, whom I find hilarious.

Awesome series, by the way.

I will third Matt and James. The high energy (which I mistook for arrogance), superficial anti-intellectualism and godawful titles of these books turned me off at first. But I have to say that I think about Blake Snyder's ideas more than any other guru's (save our host's).

Matt covered a lot of the good structure stuff, but, for me, the biggest useful Blake Snyder idea is his classification of story types in terms of inner genres. You can think about ALIEN as a sci-fi picture, for instance, but that's really just the setting. If you want to understand the essence of the story, it's far more useful to think of it as a monster movie.

Some of Snyder's categories might strike you as too broad but I get a lot out of running my new story ideas through each category to see if I can find the best fit or a different approach. I'm especially grateful for the work he's done with types like the Fool Triumphant, the Rites of Passage story and the Whydunit. I haven't thought of stories the same way since.

Ditto Matt on the importance of the "double mumbo-jumbo" rule for anyone who writes fantasy or sci-fi.

And on the idea that each scene ratchets into the next through dynamic reversal.

And the notion of delivering on the "promise of the premise."

And the idea that you should have a strong logline and title before you start drafting -- one that you've tried out on your friends.

And my favorite lesser rule is on page 130 of the first book: Too Much Marzipan. Blake tells the story of a TV pilot he once worked on about a left-handed blacklisted Communist ex-boxer. The show was called LEFTY and had about two too many "lefties" crammed into its conception. His lesson: You don't want to gin up your characters or your premise with too many cute coincidences and easy ironies.

Anyway, I admire Blake's can-do spirit. And I miss him too because I think he was just getting going in his new role as a teacher and he was open-minded and practical enough to change and add to his ideas, as he surely would be doing if he were still with us.

And, even if he is wrong about the occasional MEMENTO, is it silly to say that he gets extra points from me because he's the only guru whose honest love of movies shines through on each page of his books?

Sorry, but if this man is so expert why he wrote a piece of crap like 'Stop or My Mom Will Shoot!'? Why is not making millions writing the next Harry Potter? Is this the man who is going to teach us how to pen a successful script?

Here's my theory, Anonymous: Screenwriters, when writing on spec, have to be great architects. But as soon as you sell something, you're supposed to forget that you were the architect and become an unimaginative contractor instead, dutifully implementing every change that the producer demands, even if they demand that you knock out the load-bearing walls.

I think that the reason that most gurus don't have successful screenwriting careers is this: the better you are at architecture, the more impossible you'll find it to become a mere contractor.

I hope this doesn't bode ill for my own budding career.

And yes, James, the 15 minutes project will return-- This I swear!

I'd like to see the first 15 minutes treatment applied to some unconventionally structured films -- art films, puzzle-film thrillers. My hunch is that even with the mystery and in medias res start and other weirdness, the best ones will cover much the same ground.

Thanks for highlight these gurus for those of us who didn't take a screen-writing class. But are the more modern ones specifically talking about movies. How do TV shows fit into the discussion? Are there gurus for TV shows?

Beth: yes, there are books that teach TV structure, but it's a far less independent process, since for years nobody really "sold" a TV show based on a script, they "developed" one based on a pitch, with heavy guidance from the network every step of the way.

The idea of a "spec pilot" is only about ten years old, and they only became widespread about five years ago, so there's far less literature on the topic. And most of the older books are wrong, since hour-long TV shows used to have four acts, but they've recently changed to five, six or seven act structures.