The 15 Minutes Project #8: C.C. Baxter in The Apartment

C. C. Baxter in The Apartment 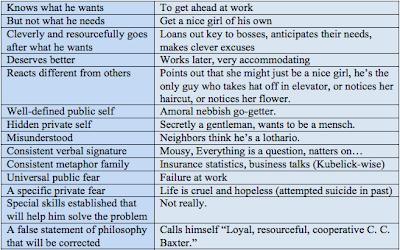 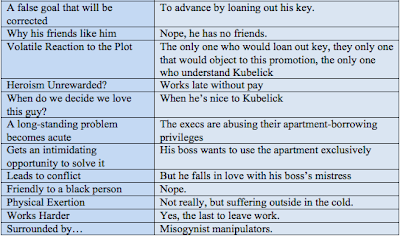 Analysis: If the story had started earlier, we could say that the problem was a lack of a promotion, the opportunity was the execs who wanted his key, and the conflict was they disrespect they showed towards their privileges. But Wilder skips over the series of soul-deadening compromises that brought Baxter to this point, and that all becomes the backstory. Instead, he starts at the moment that Baxter begins to want to pull himself out of this mess. Deciding where to begin your story is just as hard as figuring out how to end it.
Posted by Matt Bird at 7:16 PM