Books vs. Movies, Part 6: The Present is Tense 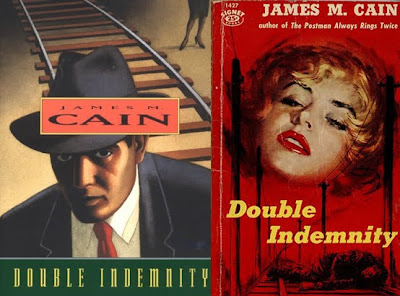 Almost every novel is written in the past tense, even white-knuckle nail-biters. These things aren’t happening now, they happened before. The prose in movie scripts (though the audience never gets to read it) is always written in present tense. Why is this?

Usually, in a book, they don’t specify what the perspective of this retrospective narrator is. We just accept that, as some point after these events, they sat down to tell us this story, even in books like “Double Indemnity”, where the hero keeps narrating in the past tense right up until the moment he dies in the final line.

Some book narrators say things like “I didn’t know then that that would be the last time I ever saw him”, but more often they don’t acknowledge that they now know what happens after the events they’re describing. Nevertheless, we have the sense that they have a little more perspective than someone would have if they were actually experiencing these things in real time. At the very least, they know which things to describe and which to leave out, or else they wouldn’t be able to tell the story. They can’t just indiscriminately describe everything they see and hear.

But the reason that screenwriters write in present tense is to remind themselves that their heroes lack that perspective. This stuff hasn’t already happened, it’s happening now. In a movie, the audience actually sees and hears the same things hero does, not just what the hero chooses to describe.

This has advantages and disadvantages for the moviemaker. Movies have more ability to drop clues that the hero and the audience miss, buried amongst those sights and sounds that aren’t important to the story. Books heroes have to line up all their perceptions in a row, one after another, and can’t turn the volume down on a key clue so that it’s low in the mix. Every reader will see every word, and they will know that each word is important to the story. We don’t really buy it when a first-person narrator misses a clue, because they were the ones who told us about the clue earlier, so they obviously spotted it.

"How to approach an adaptation: write down every great moment, every emotional beat, every scene that works, and lay them out in order. Then take them away, one by one, until you have a screenplay structure."

Saw this on another blog today. Not relevant to this post exactly, but to the whole series.

Collect the good stuff and cut that down to the essence.

Honestly makes me think of how my favorite adapters do it: Kubrick, Tarkovsky, Bresson, Sokurov.

I read Stephen King's THE SHINING years after having seen the film about a dozen times--though I hadn't seen it in a while. And sure enough, Kubrick managed to get every interesting idea, image, character, plot twist and line of dialogue into the film. Almost every time I found myself starting to skim or getting bored with the prose, it was something that didn't make it into the movie. (You can glimpse this in the big Taschen book, where they have a few pages from Kubrick's marked-up paperback. All the stuff he crosses out deserves it.)

I remember reading ROADSIDE PICNIC, one section of which forms the basis of STALKER and being similarly impressed with Tarkovsky's judgment of what to keep and build on and what to ignore or discard.

Also interesting are the ways they both adapted the strongest, most perfectly realized books they worked with: A CLOCKWORK ORANGE and SOLARIS. Kubrick improved the ending of the story and Tarkovsky's ending changed the entire meaning of the work.

Bresson's adaptations are on a different level altogether. No one has ever been simultaneously less faithful to the letter of the book and more faithful to its spirit.

Sokurov's WHISPERING PAGES is maybe the most avant-garde adaptation I can think of. An attempt to adapt the general tone and feeling of 19th Century Russian literature. There are a few recognizable characters and types from Dostoevsky and Tolstoy, but it's more impressionistic and ethereal. And still it comes closer than most films I've seen to the poetry of the works.

That's really the hardest thing in adaptation I think--the tone, the poetry, the unique feeling of the literary work and the world it creates when you're reading it.

All great suggestions! Thanks for adding so much to this week's discussion, j.s.!

As you might have guessed, I'll eventually get around to "How To Adapt A Book Into A Movie" but probably not for a while yet. In the meantime, I'll say what I think the key is: Be loyal to the theme but not necessarily the plot. Because of all the differences I've listed this week, the same events will not have the same subtext or imply the same themes onscreen as they did on the page. Don't be afraid to choose new events that will more faithfully re-create the book's underlying meaning in a visual format.

I certainly agree that the "winnowing down" approach you quote from "Screenwriting Tips, You Hack" is a good way to start, and that's precisely how I begin, but I feel that you also have to start a totally different second track, in which you boil the novel down to a logline and write a new movie outline from scratch based just on that logline.

At first, the two outlines that result will have little in common, but as you develop each, they should become more and more similar, until they fuse.

Why? Because, if the book is great, you will re-discover, as you work from scratch, why the author made the choices he or she did, and wind up re-creating their process. The "winnowing down" approach requires that you merely trust the author's choices, but the second approach forces you to make those same choices yourself, which will result in a stronger adaptation.

Have you noticed that present-tense is starting to creep into novels too these days? The HUNGER GAMES books are all written in first person, present tense. Same with the much-ballyhooed DIVERGENT. Really, more than I can name. Someone said somewhere it's the prose equivalent of the shaky camera-work in BLAIR WITCH or CLOVERFIELD -- gives a more "you are there" feeling. With all the advantages (immediacy, gripping) and disadvantages (more difficult to do humor or irony that requires perspective; unintentional absurdity ("I walk in the room. I see the sandwich. I eat it" -- not *every* action deserves such breathless treatment))