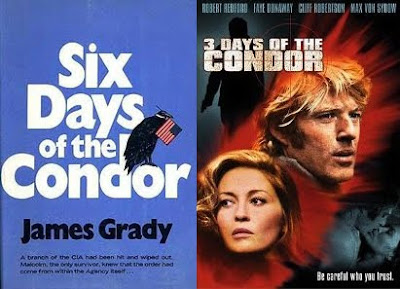 Movies demand a tighter time frame than books. A book can chart a dawning realization. A first-person narrator will tell us what they see at the time, then think about it for weeks or years, and then go back and revisit that memory with fresh eyes. Every time they return to a previous event from a new perspective, they can describe to us for the first time the things that they failed to see before.

In a movie, audiences quickly get fed up with this. Why? Instead of being limited by the main character’s perspective, we’re looking over their shoulder. If we see something, we expect them to see it too, and we expect them to react quickly, not sit around thinking about it. As a result, audiences demand that movies move a lot faster than books.

It’s no accident that the book “Six Days of the Condor” became a movie called Three Days of the Condor. “Seven Days in May”, on the other hand, was a best-seller, so they couldn’t to change the title, but director John Frankenheimer points out in the DVD commentary that if you actually go through the movie and count the days, there are only six. Movies compress.

If the hero of a book suffers from indecision that keeps them from reacting quickly, we can accept that, because we’re in their head with them, and we can get all the conflict we crave by reading about their inner struggle. But we cannot forgive any excessive delay in our movie heroes. We cannot see or feel their inner struggle, so it has no interest to us. If they are disconnected from the actions around them, we get angry. If they are failing to see what we see and react as we would want them to react, we give up on them.

Another excellent post. Lately, I've become particularly obsessed with issues of compaction, elision and pacing in my own work and everything I watch and read.

What's the most I can take out of a given speech, scene, sequence or Act and still have it work? Is there any way to start later and get out sooner?

I'm fascinated by special cases, like Bresson's films, which, in terms of events and surface action, play comparatively fast -- even by the standards of, say, a modern Asian thriller. And yet they are mostly interior works offering a kind of relationship to the protagonist you'd usually get in a book.

Considering his particular genius for both tight pacing and interiority, it's not surprising that Bresson managed to adapt two big fat Dostoevsky novels into fleet little films that are 75 minutes and 95 minutes long, respectively.

I've never seen a Bresson movie. What should I see first?

I'll let j.s. answer that, but I'll jump in to say that I must admit that I admire Bresson's movies more than I actually enjoy them. That said, one of my favorite nights at the movies was when Paul Schrader hosted a double feature of Welles's Touch of Evil and Bresson's Pickpocket (his very loose adaptation of Crime and Punishment, generally considered his best film). Schrader wanted to show the two extremes of filmmaking style, from the most baroque (Welles) to the most austere (Bresson). Viewed in that context, I gained more appreciation for Bresson, but I still favor the baroque.

Matt, I know you've written about your process before fairly extensively and that it's pretty long and deliberative, but I wonder if you think there's any merit to the idea that movies ought to be written quickly when it comes to actual drafts. That somehow the energy of drafting it fast crosses over into the pacing of the story itself.

I've heard Tony Gilroy say similar things in interviews, how he'll think about a movie for a while, then outline it in a few days and try and get a draft out in a couple of weeks. Likewise I think of John August ("Never spend more than 6 weeks on a draft of anything") and Ben Hecht (who famously wrote SCARFACE in 10 days).

As for Bresson, PICKPOCKET is as good a place to start as any, though my hands-down favorite is A MAN ESCAPED, which has pretty much a text-book example of the kind of problem solving protagonist Matt's always writing about, a hero up against seemingly impossible odds--but maybe the most honest one I've ever seen?

Bresson's final film L'ARGENT has the most radical pacing. The first time I saw it I almost felt like every other scene had been cut out of it, but in the best and most interesting way.

I've never understood why Bresson gets lumped with other supposedly slow filmmakers. I'm guessing it's because the films have a rare inwardness. But he gets there in such a contrarian way.

Schrader's said before that TAXI DRIVER was indebted to Bresson and he thinks of the finished film as a strange collaboration between his more austere vision of the script and Scorsese's naturally baroque directorial style. I think you can still see bits of Bresson in some of Bickle's voiceovers and in certain visuals, like the focus on hands exchanging money, guns, etc.

Thanks for the Bresson suggestions and the quick lesson.

FWIW, I labor over my scripts endlessly.