What’s the Matter With Hollywood, Part 3: Movies Take WAY Too Long To Get Made 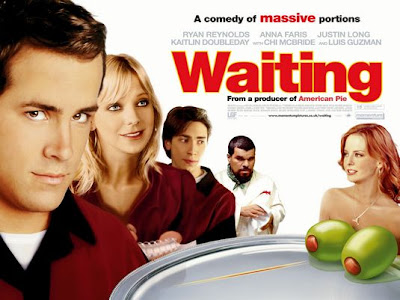 Back in 2005, I read an interview with the writers of the movie Waiting, a low-budget comedy about wacky waiters at a TGI-Friday’s-type restaurant who cause hi-jinks by spitting in the customer’s food.

The writers were talking about the ups and downs of getting the movie made. They mentioned how, at one point, after they had worked on it for years and finally sold the script, they saw the trailer for a new movie that was coming out soon called Office Space. They were worried because that trailer had a big joke in it about Jennifer Anniston being unhappy working at a lame family restaurant. Later, they were relieved when Office Space finally came out and they saw that it had only one scene in that setting.

The moral of the story was supposed to be this: don’t worry too much about competing projects. But I took away a different moral from this anecdote: They spent way too long making this movie! Office Space came out in 1999! Six years before Waiting! This meant that these poor writers had devoted at least seven years of their lives to making this movie.

It’s one thing to hear about Mark Wahlberg spending ten years trying to get The Fighter made, because at least that was an ambitious project. But Waiting?? This was a disposable little comedy that, even if had been well reviewed, wasn’t ever going to be life-changing for anybody who saw it. More importantly, it wasn’t going to make any of the moviemakers rich.

This is insane. In the heyday of the studio system, they made some good movies and they made some bad movies, but most every movie went from idea to execution to release in less than a year. Maybe, at the end of those months, you ended up with Casablanca, or maybe you ended up with Ants In Your Pants of 1939, but either way, you released it and you moved on.

This is a big part of the reason that nobody onscreen looks like they’re having any fun anymore. They’ve grown tired of the material, and all that build-up means that too much is now riding on every movie. That pressure crushes the performances.
Posted by Matt Bird at 10:02 PM

This week's series of posts is the most depressing thing I have ever real ... that includes Edith Wharton.

I know, I know... I usually try to stay positive on this blog, but occasionally some harsh truth erupts. I've got about 15 of these sketched out but I'll have to resist the urge to do them all in a row and return to celebrating some good art next week.