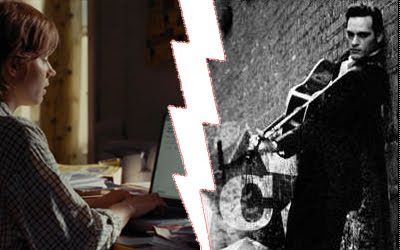 Occasionally, friends ask me to consult on reality TV series that they’re pitching. One was about travelers who go to unlikely places, one was about a secret geeky subculture, one was about young entrepreneurs... Every time, I had the same advice: someone onscreen has to be opposed to what your subjects are doing. I implored them to shoot interviews with people who disapproved of this activity.

This advice often meets resistance: “But I want to present what these people do in a positive light! I don’t want to bring negativity into it.” But the only way to show an activity as a positive thing is to show that your subjects are willing to overcome opposition in order to do it. If you just show people doing their thing and having a great time, there’s no story. If you show them doing it despite opposition, only then will we really start to appreciate them.

In my last two editions of The Meddler, on Julie and Julia and Walk the Line, I ran into similar problems. Both movies spent a lot of time on the heroes’ internal conflict, but lacked enough interpersonal conflict. This is inherently uncinematic. Not that internal conflict can’t be the topic of a movie--I’ve praised before on this blog those rare movies that find compelling ways to dramatize internal conflicts, like The Secret Lives of Dentists or Funny Ha Ha. But those were small indie movies. If you want to make a big, satisfying Hollywood movie, you’re need to show your hero overcoming actual opposition.

To re-imagine my Meddler picks, I had to ask myself: Who wouldn’t want Julie to blog? Who didn’t want Johnny to sing his kind of music? It wasn’t too hard to identify genuine sources of opposition in both cases. Once I added those elements into the mix, I was able to imagine versions of those movies that would be far more appealing to me.

Of course there’s a potential downside to this. There was an old Onion headline that said something like: “Area Man Fixes His Thomas Edison Screenplay By Adding A Character Who Insists: ‘How Dare You Invent the Lightbulb! Man Was Meant to Live in the Dark!’” When I read that, I laughed and then I winced. After all, I had just written a bio-pic about another inventor and I had amped up the conflict by highlighting anti-technology sentiments that sound silly today.

The trick, as always, is to do it well. If it seems too silly to your audience to imagine anyone being opposed to some innovation, then you have to delve deeper into that world and immerse the audience in an older way of thinking, one in which that opposition would actually make sense. Everybody who achieves anything faces some opposition, no matter how weird that may seem in retrospect. Your job is to dramatize that opposition.