The Meddler #8: My Fixes for Walk the Line, aka Man in Black 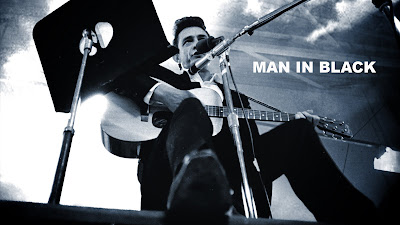 Okay folks, like last time, this gets very long, since I’m re-writing the whole damn movie. (And yes, I admit that I’ve compressed and slid around some real-world events, as all bio-pics do.) (By the way, this is a pretty good example of the 30-beat beatsheet I mentioned before. You’ll see what I mean when I say that a beat can include more than one scene, but each beat is one “event”.)
First of all, I’d change the title to The Man in Black:

Well, now I have to go listen to some Johnny Cash!

Your MAN IN BLACK sounds like a pretty great movie. Maybe a little bit light on all that self-destructiveness you find so objectionable in other biopics and the lamer WALK THE LINE.

(Have you ever read Paul Schrader's unproduced Hank Williams' script?)

The journey to be true to one's authentic artistic voice in a commercial medium whilst supporting oneself and one's family and being pulled this way and that by one's handlers and the money men -- that sounds kind of familiar, like something you perhaps have experienced, yes?

It is astounding how much I want to see these movies you are fixing! Thanks for at least allowing me to build the neural pathways...