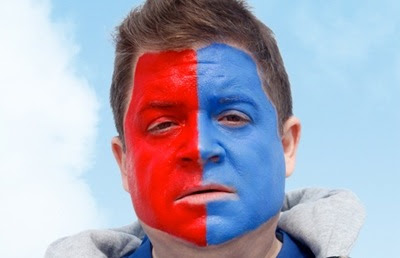 One of the biggest mistakes that many indie movies make is to pile on the pathos with a shovel. In the interest of telling a “warts and all” story, they actually present a comically exaggerated amount of gloom and doom. The two worst movies I saw last year (well, okay, not counting Salt) were Greenberg and Big Fan. The protagonists of these movies are such extreme screw-ups that they literally can’t do anything right… Itchy, twitchy, belligerent, incapable even of pursuing their own self-interest when opportunity is staring them in the face...

Do such people exist in real life? Yes, but they usually end up dead or locked up by the time they’re thirty. You just can’t screw up all the time and get through your day. More importantly, such characters just aren’t compelling enough to hold a whole movie. It’s impossible to care very much about a main character who won’t meet you halfway.

The most disappointing thing about Big Fan is that it was written and directed by Robert Siegel, so I had higher hopes. In the time it took him to make the movie, he wrote a follow-up script that wound up getting made by another director and beating the first script to the screen. And there’s no wonder it did, because it was a thousand times better…

What I loved most about The Wrestler was how well it captured the tragedy of the functional screw-up… the stand-up guy who is clever and charming, but nevertheless persists in screwing up 5% of the time, which is enough to ruin his life. How many decisions do you make in a day? What if every 20th decision was self-destructive? That’s all it would take, isn’t it? The Wrestler is tragic because he’s screwing up a good thing. The heroes of Greenberg and Big Fan aren’t tragic at all, because they’re just screwing up lives that were already hopelessly hapless.

Occasionally, you can create a total screw-up like Christian Bale in The Fighter that is still a believable and compelling character, but he’s the exception that proves the rule. It’s vital that he is not the main character, because, even though we find him magnetic, we just can’t stand to be with him for more than a few scenes at a time. For most of the movie, he’s the antagonist-with-a-heart-of-gold, which is a far more poignant use of such characters. I often sing the praises of big personalities on this blog, but with some types of characters, it’s good to remember that a little goes a long way.

As if on cue:
http://www.theonion.com/articles/scientists-baffled-by-mans-incredible-ability-to-f,19422/

Ha! Yes, precisely. Thank you for the back-up, Onion.

Battery load tester is used to check the voltage rating of the running battery. It has a display meter with voltage readings up to 16V along with the battery health indicator. lithium battery

This is Very very nice article. Everyone should read. Thanks for sharing. Don't miss WORLD'S BEST GAMES