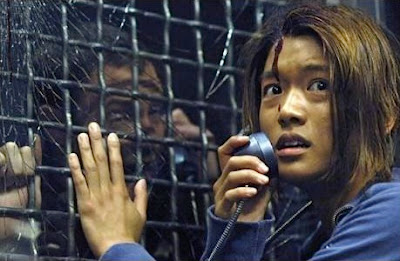 A lot of things eventually went wrong with the reboot of “Battlestar Galactica”, and fans debate when the show officially went downhill, but to me the trouble started early, when they began to flip a metaphor that never should have been flipped.

“Battlestar”, like almost every other great show from the last decade, was one big metaphor for 9/11. After hearing a bunch of racists on TV talk about how our new enemies were a monolithic, hive-minded inhuman force that lived for nothing but our destruction, writer Ronald Moore decided to use the sci-fi genre to explore what would happen if that were actually true. What if mankind was attacked and decimated by an enemy that was actually hive-minded, monolithic, inhuman and psychopathic? Even then, would we really need to abandon all of our civil liberties in order to defeat them? To that end, he re-envisioned the Cylons as robots who used to work for mankind but revolted. Now they could look like us and insinuate themselves as sleeper agents, but their minds could receive instructions from the hive at any time turning them back into the relentless killing machines they were built to be. Even those who had come to love their new nationality could not be trusted.

For the initial miniseries and first season, this worked perfectly. It was humbling for Americans to watch and realize how different and horrific our lives would actually be if any of these things we say about our enemies were true, and it was fascinating to see which values some characters would fight for, even in this extreme situation, and which ones would be jettisoned when they became inconvenient.

But sometime during the second season, things started to get much messier. Once the humans started to finally get the upper hand in some confrontations, they started having debates about how it would be wrong to punish the cylons because they were individuals with human rights. Wait—what? Nope, they weren’t individuals and they weren’t human. It had been well-established that their minds were not their own. To suddenly have the “liberal” characters arguing otherwise just seemed inane, especially since we were clearly supposed to agree with those characters. In the real world, collective punishment based on race or religion is evil. But in a world where the villains really do all share one big psychopathic mind, it would kinda make sense.

The complex metaphor of the miniseries had started to be simplified down to “Cylons = muslims.” Suddenly, all of those nasty qualities that the Cylons displayed became offensive. They had attempted to extend their metaphor, but instead, they had flipped it, insulting everybody. 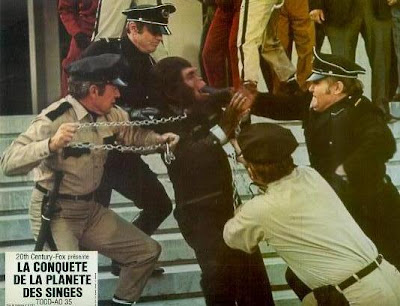 This wasn’t the first time this had happened. A very similar flip happened with the original series of Planet of the Apes movies. In the brilliant original movie, the metaphor was “Let’s show white people what racism feels like by putting them in a world where they’re treated as an inferior race by a bunch of prejudiced apes.” This metaphor came with an implied parenthetical “(and isn’t that ironic since white racists sometimes say that blacks are ape-like)”, but that was as far as that went.

However, by the time you got to the fourth movie in the series Conquest of the Planet of the Apes, the metaphor had lamentably flipped: they went back in time to the period when apes had been raised to the status of menial servants by humans and we saw the apes revolt, complete with lots of “black power” style imagery. Uh-oh, somehow the tricky metaphor of the original had been reduced to “blacks = apes”, that can’t be right! Metaphors, especially tricky metaphors, can only bend so far. Don’t trap yourself into saying the opposite of what you set out to say!
Posted by Matt Bird at 10:07 AM

This is an excellent post. The unspoken point you make is that writers should have good ideas. In both cases you present, the second metaphor is superficial because it relies on 1:1 thinking. (At which point I would argue that the idea goes from metaphor to allegory.)

I don't actually think that changing metaphorical horses midstream is necessarily a bad thing. Writers like Sondheim do it all the time to great effect. Take INTO THE WOODS: the first act is all about Disney-style fairytale values, but in the second act *SPOILER* all that gets turned on its head. The narrator gets eaten. The villains become sympathetic. The heroes make mistakes. It's thrilling stuff.

Maybe the trick is in the trajectory: don't trade an interesting metaphor for a boring one. If BATTLESTAR GALACTICA had started with "Cylons are Muslims" and then complicated it with the realities of fighting a hive-mind, I think it would have worked.

I don't know, I actually think that in BSG, the flexibility of the metaphor worked to their advantage for quite a while. It allowed them to examine the issues from many angles, reversing our expectations (to use one of your favorite phrases) and keeping it from getting too stale or too literal. I especially liked when the Cylons became the metaphorical Americans to the human Iraqis.

In my opinion, the wheels began to come off the wagon just after this reversal, when the humans escaped and went on the run again. The show's intro always ended with "and they have a plan." But after the humans' escape from New Caprica, I'll be damned if I could tell you what the Cylons' plan was for the bulk of that season. At that point, the humans and cylons seemed to be chasing and fighting each other more out of momentum or habit. Now, perhaps you can argue that this is because the writers had finally stretched out their metaphor until it had become shapeless, but I think they simply lost their way more generally.

Certainly, Jonathan, some sturdier metaphors can be flipped... vampires represented a different teen problem every week on Buffy.

And that's true, Steve, I did like it better when the metaphor flipped again in the third season and it became cylons = occupiers, humans = insurgents, which was a pretty daring move. And yeah, the cylons' unclear motivation after that was the real death knell.

Nice post, Matt. Agree with most of what you say and what's been written in the comments. Have to add that "and they have a plan" was some b.s. added by the producers in post to the pilot--got that tidbit from some inside men.

I loved BATTLESTAR until halfway through the second season. Where it truly went off the rails for me was with the handling of the Pegasus storyline. Here's the single most momentous thing to happen to the last survivors of the human race: to find more humans. And with a fully functioning battlestar! The universe suddenly seems not so lonely or so dangerous. And the commander, a ruthless war hawk, offered endless opportunities for conflict with Adama and everyone else. I was sure that this storyline would provide the major arc for the rest of the season. Nope. They dispatched it in less than two episodes. Which says to me that the writers had suddenly forgotten why they made the show in the first place. They'd lost faith in the inherent interestingness of their material. Or maybe they just caved to network pressure for more standalone eps or to speed up the storyline. In any case, until that moment, BATTLESTAR was refreshingly primal to me. It wasn't about complicated mythologies and metaphors--as far too much sci-fi in film and television is--so much as basic survival.

"Certainly, Jonathan, some sturdier metaphors can be flipped... vampires represented a different teen problem every week on Buffy. "

and now they represent a different vice, fetish, or disenfranchised population every week on True Blood.