The Meddler #3: Some problems with The Ghost Writer... 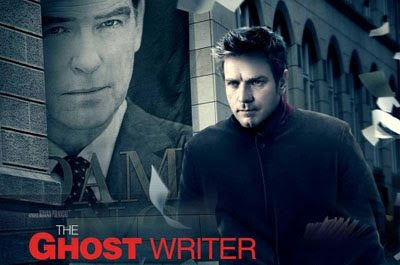 The Ghost Writer was a pretty-good conspiracy thriller that came out last year, directed by Roman Polanski. (I’ve never mentioned Polanski on this blog, partially for fear of the flame-wars that his name tends to ignite on the internet in recent years. Let’s try to avoid those, pretty-please, and focus on the work. I promise you that lots of the directors I’ve written about have done things that nobody would approve of.) The movie got very mixed reactions, with some critics putting it on their top ten lists and some others quickly dismissing it.

Pierce Brosnan plays a very Tony Blair-like figure: a recently retired prime minister of England who left office facing serious human rights charges after he acquiesced to a U.S.-led war and possibly participated in illegal renditions. He’s now holed up in a beach house on Martha’s Vineyard, writing his memoirs, and avoiding attention from the Hague. When his first ghost-writer dies under mysterious circumstances, the word goes out to find another…

This is where our story actually begins: Ewan McGregor is a professional ghost writer who doesn’t care about politics, but gets bullied into the taking the job by his pushy agent. He agrees to live at the beach house and try to get the ex-PM to tell a more interesting version of his life story in the one month leading up to the pub date. Brosnan turns out to be brittle and uncommunicative. McGregor finds notes from the previous ghost-writer hidden in his room implying that he had found damning evidence about Brosnan and was killed in retaliation. McGregor decides to pick up the investigation where the previous writer left off. He uncovers Brosnan’s big secret: he was secretly recruited into the CIA in college and has served them ever since! McGregor tries to prove this, but Brosnan is killed by a peace activist and McGregor is targeted by more shadowy forces…

Here were my problems with movie, focusing on the first act:

Okay, that’s just Act 1, and I’ll mostly keep my focus there, but there are still other problems afterwards: What will be the consequences if McGregor reveals any of this information? The world already hates Brosnan, right? In fact, he gets assassinated based on information that’s already out there, so how much more harm could additional posthumous accusations do, especially if they only confirm Bosnan’s image as America’s toady? Who would be endangered, other than the whistleblowers themselves? What are the stakes? If I have time left over tomorrow, I’ll touch on solutions to those problems too…