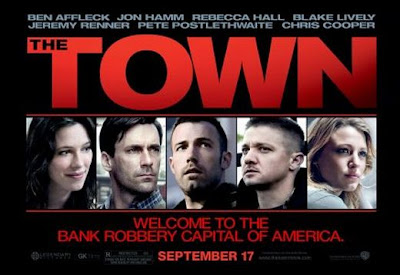 So yesterday, I laid out my problems with Act 2 of The Town. So here are the fixes I would have made if I had been hired to do a script polish:

(Let me say that I’m well aware that this is a presumptuousness and boorishness thing to do. Maybe you’ll say that I’m just adding a lot of “on the nose” dialogue in the place of the more subtle character work that was already there, but I thought that these were notes that needed to be hit with more emphasis. I would love you to defend the movies against my meddling in the comments. If you can convince me that the original screenwriters, who all make a lot more money than I do, were right, then that means there’s one more movie I can enjoy fully. Or you can suggest your own fixes—I’d love to hear those, too. So here we go…)

So that’s it. I tried to make it clearer why the gang would follow him, and why they would be attracted to each other, and why she would trust him. I tried to establish more tension: within Affleck, between Affleck and Hall, and between the relationship and the gang. I still gave them chances to reveal their painful back-stories, but more reluctantly and only after they have a good reason to do so. Above all, I tried to give everybody a little more common sense, but still have them do all the same stuff.

In terms of getting them together, I tried to put the burden on the plot, not the dialogue. The writer can create situations that force characters together, so that they don’t have to do all the work of coming together through talk alone, which is too much to ask of your characters (or your actors).

I don’t mean to cut out the great FBI stuff or the stuff with his dad in prison, that would still be intercut with this, but I would lose the subplot about going after some other guys who threw bottles at her car (and yes, Luke, Blake Lively can go too). That’s the kind of subplot that you only have time for if there’s not enough conflict in the central relationships.

I wish I'd seen your version of the movie. Nice job! Btw, have you seen Robert McKee's appreciation of THE TOWN in Script magazine on-line? McKee is mostly focused on the dynamics of Affleck's good-bad guy.

I really like the changes you've made here, as they take the time to bother giving Rebecca Hall's character something resembling an inner life, rather than just making her the fragile Madonna to Blake Lively's drunken whore, and some actual meat to her relationship with Affleck. Her complete absence of motivation was one of the movie's weakest points, although I still found the entire thing genuinely enjoyable.

I haven't seen The Town, and one of the reasons is that I've refused to see any more movies with the premise Man Kidnaps a Woman and Then She Falls in Love with Him. This movie isn't that exactly, but it's too close.

So, although I appreciate what you're trying to do here--especially because too many movies fail to show WHY two people might be interested in each other--my question is whether trying to make an essentially predatory relationship better makes the movie better. I don't know how the movie ends, but, to me, any hint of I'm So Glad He Preyed Upon ME would be gorge-rising. Is making the relationship more real, more like it seems it could be a good relationship, leading us up to the point where the female lead, upon learning the truth, has no choice but to give in to her rage and completely destroy him? (I mean, there's a reason that most people have those urges when they are experiencing divorce.) Or is it the artier kind of movie where he succeeds in destroying her bit by bit? I don't think that this movie can satisfyingly end with any kind of middle ground.

Thanks, guys, this was a lot of fun!

Anon #1, I read through McKee's bombastic prose just for you. I would dispute his claim that the ending feels like justice, but I don't place as much value on that as he does, so I didn't mind it. I don't mind unjust endings as long as they don't have a "stand up and cheer" tone, which this one didn't.

Anon #3, yeah, it sounds like this movie would probably get your gorge up, even if they shot it with my changes.

I really like the changes you've made here, as they take the time to bother giving Rebecca Hall's character something resembling an inner life, rather than just making her the fragile Madonna to Blake Lively's drunken whore, and some actual meat to her relationship with Affleck.
Please click to play,if you wanna join casino online. Thank you