The Meddler #1: Some problems with The Town... 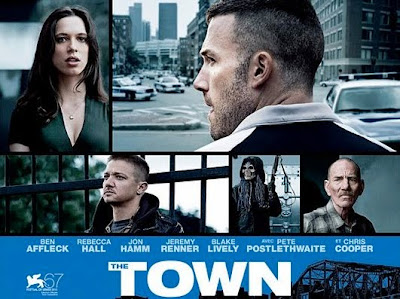 So I’m trying out a new feature where I’ll play script doctor for good-but-not-great movies, movies that I feel were one draft away from being ready to go when they were shot. I’ll use this feature to imagine what I would have done if some producer had hired me to do a last-minute “polish” on the screenplay. That said, the point is not to change plot twists I didn’t like. I’ll try to stick with ways to take the same basic characters and the same basic story, but get more out of certain scenes, re-structure parts of the movie so as to manage viewer expectations better, and make the characters more compelling.

I actually like The Town a lot. It’s a good old-fashioned heist thriller: Ben Affleck plays the leader of a heist team in the Charlestown neighborhood of Boston. They take a bank teller (Rebecca Hall) hostage, but after they let her go they worry that she might be able to identify them, even though they were wearing masks. Affleck tries to get to know to find out if she’s going to be a problem. Of course, he falls in love. As the gang, especially his buddy Jeremy Renner, gets more violent, he comes to see this relationship as a way out.

But I had some problems with the second act (aka the middle of the movie). Here they are:

But anybody can bitch about problems. Do I have any solutions? Let’s find out tomorrow, when I offer my re-write of the beats of Act 2...

I hope your script has a solution for the awfulness that was Blake Lively....

Glad to hear at least one other person didn't think THE TOWN was the Greatest Movie of All Time. If I remember correctly, my biggest problems was the fact that the woman's knowledge of the criminals doesn't actually play into the third act -- which means we've sort of been watching her for nothing. Looking forward to seeing how this "Meddler" series develops...

One minor clarification: Toonies aren't just other Bostonians, they are wealthy outsiders gentrifying Charlestown. The proximity makes the antagonism seem a little less unearned and directionless, I think. Other than that, your critiques are spot-on-- especially about the idiocy of Ben Affleck's "plan" to neutralize Rebecca Hall. Can't wait to see your recommendations to fix it.

Ah! Thanks, Cassandra, that wasn't clear from the movie.

If I remember correctly, my biggest problems was the fact that the woman's knowledge of the criminals doesn't actually play into the third act -- which means we've sort of been watching her for nothing. Looking forward to seeing how this "Meddler" series develops...