Hey guys, it’s time for another Special Guest! Jonathan Auxier and I met when we both were being feted for writing screenplays about scientists. We discovered we had a lot in common, and enjoyed bickering about those things we didn’t. We’ve commiserated on the screwy paths our careers have taken ever since. Let’s see what he has for us... 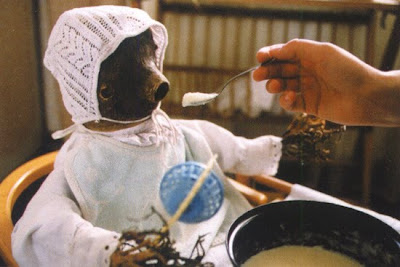 
Jan Svankmajer is considered by many to be the greatest stop-motion animator in history (any chump can make an army of skeletons, but it takes a true genius to animate chunks of raw meat!). He is best known for his 1988 adaptation of Alice in Wonderland, but for my money, Little Otik is the better movie.

Little Otik is based on an obscure Czech fairy tale, but the tropes are familiar enough. It tells the story of a barren husband and wife who desperately long for a child. After digging up an old tree in the yard, the husband decides to dress the stump up as a wooden doll. He intends it to be a sort of joke, but the wife quickly latches onto the doll, treating it like a real boy. And then the impossible happens: their “Little Otik” comes to life! For a brief moment, we think we are watching one of those happy fairy tales where good things happen to deserving people. But our feelings quickly change when Little Otik gets hungry. First he eats all the food. Then he eats the cat. Then he eats the neighbors. Little Otik is like the gingerbread man -- except instead of running away from people he eats them.

This movie perfectly captures the tyranny of a mindless, screaming baby -- selfish in his appetites, unstoppable in his rage. It is this aspect that elevates Little Otik above simple genre horror. Each scene speaks directly to our own subconscious anxieties and fears about children, parents, and The Miracle of Life. 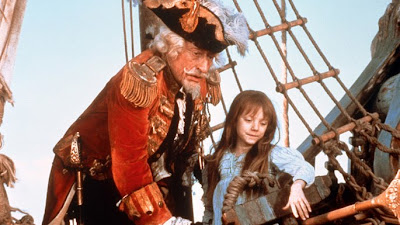 
If Georges Melies were alive today, I think he would have been very jealous of The Adventures of Baron Munchausen. This movie is best known for being one of the biggest box-office bombs in history, but it is also an undeniable masterpiece of imaginative storytelling.

The movie chronicles the life of Baron Munchausen, fabled to be the greatest liar of all time. When the movie begins, the Baron is now an old man, hobbled and hushed by an Enlightenment society that cares less about stories than they do about the Turkish army storming their gates. The villain in this movie is a low-level bureaucrat who executes local war heroes for “demoralizing” the ordinary soldiers. Munchausen is next on his list. As Munchausen flees (in a hot-air balloon made from women’s undergarments!), the lines between reality and fantasy blur. He goes off to find his old cohorts, including a man who can run at incredible speeds, and a man who can lift impossible weights. Together, Munchausen and his companions single-handedly engage in battle against the Turks to save their besieged city.

To my thinking, most of Gilliam’s movies could often use a stronger narrative. They burst with vibrant, imaginative imagery, but that imagery seems to come at the cost of character and plot. The Adventures of Baron Munchausen is the shining exception to that rule. Every scene works beautifully to progress Gilliam’s thesis -- proving that a movie with an Idea need never be boring. 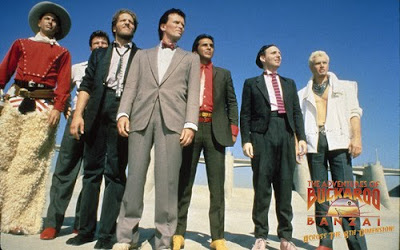 
A few months ago a friend of mine invented a cocktail named the “Perfect Tommy.” He was, of course, making a reference to the 80s cult movie The Adventures of Buckaroo Banzai. This movie was designed for homage. It contains enough bizarre characters, terms, and events to rename every drink in the book. I am not going to try describing the plot because it will only make you head hurt. Instead I’m going to transcribe the Star Wars-style crawl that opens the movie:

Buckaroo Banzai, born to an American mother and a Japanese father, thus began life as he was destined to live it ... going in several directions at once. A brilliant neurosurgeon, this restless young man grew quickly dissatisfied with a life devoted solely to medicine. He roamed the planet studying martial arts and particle physics, collecting around him a most eccentric group of friends, those hard-rocking scientists The Hong Kong Cavaliers. …And now, with his astounding jet car ready for a bold assault on the dimension barrier, Bucakaroo Banzai faces the greatest challenge of his turbulent life ... ... while high above Earth, an alien spacecraft keeps a nervous watch on Team Banzai’s every move ...

Please note that I did not make up the part about the aliens. So before the movie has even started, we’ve got neuroscience, martial arts, rock-and-roll, jet cars, dimensional rifts, and aliens. Add to the list: skinny ties, secret twins, cold war missile strikes, Orson Wells, and the greatest “meet cute” in movie history. The whole thing wraps up in a sort of music video credits sequence that makes “Jai Ho” look like the electric slide.

There is no question that Buckaroo Banzai is not everyone’s cup of tea. (I forced my wife to watch it with me recently. She hated it. Hated. It.) I think its contemporary counterpart might be Scott Pilgrim vs. The World -- both are playful, ambitious movies, deeply rooted in the pop sensibilities of their ages. Both failed to make money. Both are beloved by dorks like me. 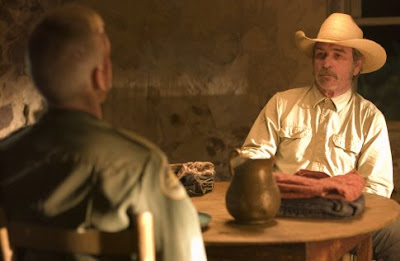 
Let me just get this out of the way: The Three Burials of Melquiadas Estrada is one of the best-written movies I have ever seen. The script, which is based on the real-life murder of Esequiel Hernandez, is a punishing moral puzzle that completely upends conventional understandings of innocence and guilt. Three Burials... wasn’t underrated, but it was definitely under the radar of the general movie-going public. I suspect this is because the country was too busy freaking out over another revisionist cowboy movie that year.

The story follows the accidental murder of an illegal immigrant (Estrada) by a hard-nosed border patrol agent. It’s the sort of issue that might normally get swept under the rug by local Texas authorities, but for the intervention of a simple cattle rancher named Pete Perkins. Perkins, you see, was Estrada’s closest friend. And when he learns of what’s happened, he resolves to take justice into his own hands. This could be the setup for a simple revenge-flick, but Three Burials... is so, so, so much smarter than that. The movie is told out of chronological order, and with every new scene we gain a new understanding of characters’ guilt and innocence. The actual events are never in question, but what those events mean is constantly shifting. It’s a moral whodunit.

It’s been a long time since I’ve seen Tommy Lee Jones play a character without a badge. His Pete Perkins is a sort of grotesque foil for the humorless lawmen he is so known for. It reminds me of how after decades of playing two-dimensional gunslingers, Clint Eastwood directed himself in Unforgiven -- a movie that mercilessly deconstructs the gunslinger. Jones performs a similar trick with Three Burials..., creating a movie that feels both current and timeless. (A special mention should also be made of January Jones, whose performance as a washed-up Ohio prom queen is almost indistinguishable from her dazzling Betty Draper ... it’s amazing what a change of costume can do.)

Jonathan Auxier is a screenwriter, novelist, and former yo-yo champion. His first book, Peter Nimble & his Fantastic Eyes will be coming out from Abrams this fall. You can find out more by visiting his delightful new-ish blog at www.TheScop.com.