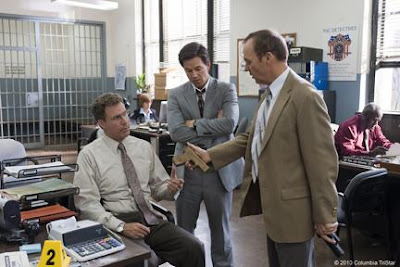 Generic is bad. If you want to give your cop character a little personality, don’t give him a donut craving. It’s not unbelievable, but it’s a cliché. Instead, you should give him something specific, so, let’s see… how about “I’m the crazy saxophone-playing cop who always has his sax around his neck!” That certainly is specific. But it doesn’t ring true. The key is to come up with details that are unique but also universal. This is why writing is so damn hard.

The Other Guys was a real mixed-bag throw-everything-at-the-wall-and-see-what-sticks kind of a movie, so it’s not surprising that it provides examples of how to do this right and also some more questionable examples as well. Let’s start with the smartest choices: all three lead cops have great unique-but-universal details:

So far so good. These are all specifics that we hadn’t seen in any other movie, but are nevertheless believable problems for NYPD cops to face.

One thing I like about those three details is that they could apply to cops in either a comedy or a quirky drama. That’s always a good sign that you’ve got believable characters. If your character’s backstory is so bleak that they could only exist in a drama, it probably won’t work as a drama either, and vice versa with comedy. The difference between a believable comedy and a believable drama is closer to 10 degrees, not 180.

But The Other Guys also has a bunch of other bizarre character details that could only happen in a gonzo Adam McKay movie. That’s not necessarily bad, but you definitely want to get a big laugh to justify such a breach of believability.

Okay… each of these gets some laughs, but the writers were smart not to make these strange details the hooks they hung these characters on. They get away with the gonzo stuff because each character has a unique but universal hook that has already established our sympathy.