If you guys remember Roberto Lovenheim from last time, then you know that he goes the extra mile to track down obscure international gems that may have never been seen in the states outside of film festivals, so here’s another international sampling of sex and death: 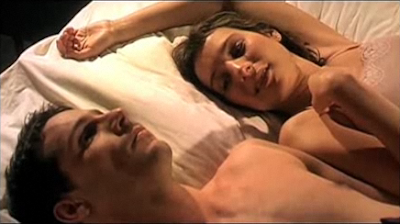 Two strangers meet at a party and spend the night in a cheap motel room, but what happens is anything but cheap. This amazing film never goes flaccid while exploring the deepening relationship between Daniela (Blanca Lewin) and Bruno (Gonzalo Valenzuela). Movies like this are not new. Dustin Hoffman and Mia Farrow did it in John and Mary (1969). What is new is Julio Rojas always surprising screenplay that keeps changes topics in an every deepening quest. Two people go from causal sex to true need and understanding. They carry secrets in their wallets that each, in turn, sneaks a look at, but never admits to the other. It is what must be confessed between hotter and hotter sex and frantic pillow fights.

Blanca Lewin comes from a long history of soap operas and television series. Gonzalo Valenzuela comes from telenovelas; the TV serials that are a staple of Latin countries. In a country like Chile, without much movie production, TV is the way to work as an actor. It carries none of the stigma attached to TV roles in the United Sates. If either of these actors were part of a bigger culture, they would be international stars. Blanca would vie for the Paz Vega roles, and Gonzalo might be a rival of Gael Bernal Garcia. (Gonzalo’s sister Luz Francisca Valenzuela was Miss Chile in the Miss Universe contest in 1996 but she lost to Miss Venezuela). 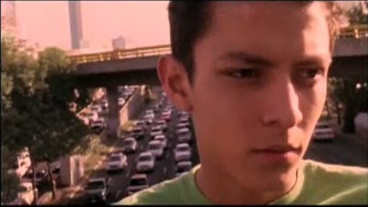 
This is not a glamorous profession like bank robbing. All it takes to steal cars is a screwdriver and guts. The initiation of Ivan starts in a junk yard. His uncle Jaimie orders him to strip naked, then locks his shirt, pants, and underwear in different wrecked cars. He hands him a window shiv and tells him if he can jimmy the car doors open, he can get his clothes.

Every big city has a section for stolen cars. In LA it’s Bramfield Street in Pacoima. In New York it’s Willet’s Point in Flushing. In Mexico City it’s everywhere. Vast tracts of land set to one purpose: a thieves market for auto parts. Partes Usadas is about the low lifes who steal by night to fill parts orders by day. You don’t find moments like this in Grand Theft Auto. The fascination of Partes Usadas (Used Parts) is that it looks as low life as the characters it portrays. No lovely lighting or polished dolly moves here. Even the quality of the film looks like it was outdated stock that was stolen.

At first I wanted to click “eject” because the movie has the smell of amateurism. But I got slowly hooked as I realized the lack of style was the style. Emery Eduardo Granados could be another Gael Garcia Bernal if he gets some breaks. Meanwhile Partes Usadas is a primer about what happens when your BMW disappears. Chances are if the police don’t find it in two hours there won’t be enough left to honk the horn. 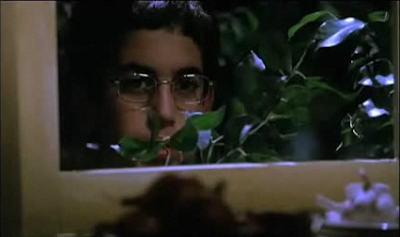 
Young Nadav lusts after his sexy Aunt Nina by peeping in her window and writing lustful stories in his diary about her. When Nina’s husband dies in a bomb incident while in the Army reserves, Nadav’s mother sends him temporarily to live with Aunt Nina so she won’t be alone. From the spare room he gets to observe all the twists and tragedies of her love life. Soon Annon installs himself as her perfect lover. Actually he was part of the Army detail who came to inform her of her husband’s death (in a great bit of humor, they soldiers on the detail get the wrong apartment and inform the wrong widow. She faints, but manages to scream out “You want Entrance B” as she recovers).

Annon is everything Nina wants. He is sensitive to the point of crying, he is poetic, and he is dedicated. He also has a girl friend. What make Nina’s Tragedies so watchable are the little twists between tragedy and humor. Like the naked man Nina sees in the street who resembles her husband. He turns out to be the boyfriend of a Russian woman who is a buddy of Nadav’s peeping Tom accomplice. So it goes.

The film would not have worked if not for Shmil Ben Ari (Annon), who seduces not by sweeping Nina off her feet, but by crying over her tragedies. What an original twist on a guy trying to prove he is sensitive. Meanwhile Nadav is coming of age in this cozy world of lust and irony. Some movies work so much better on the small screen, and I think this is one of them. In a theater Annon’s crying would be unsettling. We would think, “Get over it.” On an intimate screen his over-the-top emotions are just perfect. 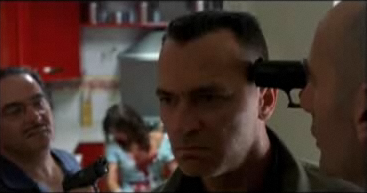 
Can you believe a bank manager as the hero of an action crime film? Remember this was 2002 and bankers hadn’t yet become villains. His daughter has been burned to death in a suspicious forest fire in primo tourist area of the Spanish coast. An unrelated bank robbery at his branch turns up a mysterious map of the same forest area when one of the safe deposit boxes is rifled. The only problem with this otherwise gripping, original, and character filled thriller is the confusion between two safe deposit boxes that both seem to contain clues.

If you can get buy this plot confusion that took me two fast-backwards of the DVD to understand ( that is, to understand that I would never understand); the rest of the film is gripping. The banker wants to find the truth about the death of his daughter. An ex-cop on the take wants to blackmail those who can deliver enough money to send him and his alcoholic wife out of the country for a better life. The two plots and the two guys are going to meet somewhere and nobody is going to be happy with the outcome.

The film is fascinating: full of great characters played by great character actors. They always pulling you forward to the next scene. Americans don’t get to see many European action films. They don’t come to art theaters where the crowds wants picture postcard views of Europe, and they never come to multiplexes where the audience can’t even read the subtitles. It is also a deliciously violent film, assuming you like guys getting shot in the back of the head. I do.

Robert Lovenheim is a longtime movie producer turned internet entrepreneur. There's a lot more at Robert's ambitious website, Movie With Me, which has has a ton of cool content in addition to his blog.
Posted by Matt Bird at 11:33 PM