Storyteller’s Rulebook #53: Do More Than One Thing 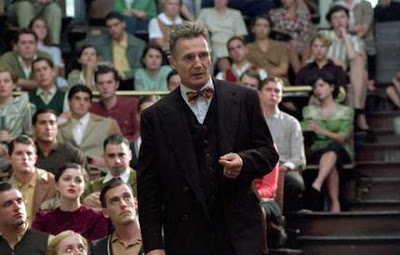 My school had its own official storytelling guru, an energetic contrarian named Lewis Cole who had led a very colorful life as an SDS man before he became a screenwriter. Unfortunately we were the last students he shared his unique perspective with, since he passed away shortly after our class. Here’s something he said that’s really stayed with me:

Bill Condon had just come through to show his latest film Kinsey. I thought it was pretty good, but I saw Lewis looking unimpressed during the Q and A, so I stopped him in the hall and asked him what he had thought of the movie. He shrugged and issued a definitive “meh.” I was surprised. I asked him why he didn’t like it and his complaint was one I’d never heard before: “Every scene only did one thing.” Yeah, so? Is that bad?

Lewis launched into an even more sweeping condemnation (as he was always wont to do), explaining his general theory of why bio-pics almost never work: Even if they find a way to follow the thread of one guy’s personal development over ten years, you can be pretty sure that there won’t be more than one thread that follows that circuitous path. As we fastforward from year to year, each scene will be one piece of one puzzle that neatly snaps together at the end, but none of the other characters will ever get to live and breathe, because the story is moving too fast to serve them.

Thinking about this afterwards, I went back to Aristotle’s “Poetics”, which Lewis had made me read. Aristotle famously insisted that a drama (by which he meant a drama on stage) should obey three unities: unity of time, place and action. One short period of time, one confined setting, one story. Lewis had encouraged us to apply the same standards to our screenwriting. Now you all know by now that I would certain agree that a story has to be about one major problem. So I clearly agree with the third unity, but, up until then it had seemed to me that movie-making had the freedom and therefore the responsibility to shake off the shackles of the first two. Why stick to one time or place? We can go anywhere, man!

But as I re-evaluated Kinsey through Lewis’s eyes, I came to agree with him. It was too breezy. You can follow one story all over the world if you want, or over several years, but your subplots will suffer. Every scene will only do one thing. If you want to construct a more complex narrative, then all your characters have to be stirred up together in the same pot.

Another great teacher of mine, Malia Scotch-Marmo, goes so far as to insist that every movie should have six big formal occasions in it. If you keep gathering the same bunch of people together then your characters will keep colliding in fun ways. Just because movies can cut away to anybody doing anything at any time, doesn’t mean they should. Sometimes the best way to write a satisfying movie is to re-introduce some of the limitations of the playwright.

So what are the most effective biopics, the ones that either flout the rules or somehow attain more of the classical unities? What about the recent trend, as with titles like THE QUEEN -- written by a playwright -- that tend to focus on one defining incident in the life of a historical personage.

Whoops, missed this comment! This is a good enough question for a follow-up post, so that will come soon.