We’re ringing the bell for round two of Special Guest Picks! Many of our original contributors will return but we’re also welcoming a whole new gang of guests. We’ll start out with Michael Stark. I met Michael online and we’ve been pen pals ever since, though we’ve never met in person. We turned out to be ships passing in the night: I’m an Atlantan who ended up in NYC, while he’s a Native New Yorker who ended up in Atlanta. Here are three of Michael’s picks: 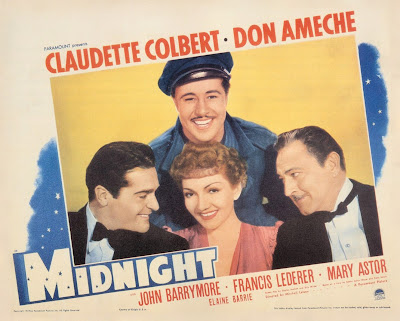 Midnight (1939)
Director: Mitchell Leisen
Writers: Billy Wilder and Charles Brackett
Paris is the ultimate cinephile’s paradise, home to half a gazillion tiny retro moviehouses scattered throughout the city. My ex-wife was French, so we made many a sojourn there. Every time I opened the weekly Pariscope, I’d make a wish that a fave flick or a rare gem I’d never seen before would be playing at one of those tiny retro house and it’d always come true. Always! The CineGods kept answering my prayers. I’d sure like to see Cronenberg’s Crash or Greenway’s Baby of Macon and – BAM -- there they were, playing somewhere the week we were in town. So seeing Midnight, Billy Wilder’s (screenwriter, not director on this one) valentine to Paris on my first visit there was the kinda serendipitous magic that can only ever happen at – well -- the movies. It wasn’t a Midnight showing, however, so no film lover’s hat trick achieved that time around.

This classic screwball has former showgirl and current gold digger Claudette Colbert fleeing Monte Carlo, arriving in the City of Lights without a sou. She’s rescued by gallant knight (and errant taxi driver) Don Ameche, who instantly falls for her witty repertoire and spitfire charm. He agrees to drive her around town till she finds a job so she could eventually pay him back for his noble services. She responds, “Here’s how things stand. I could have you drive all around town and then tell you I left my purse home on the grand piano. There’s no grand piano. And, no home. And, the purse? Twenty-five centimes with a hole in it. That’s what’s left of the Peabody stake.” But soon Colbert starts falling hard for Ameche too, which in these hard economic times wouldn’t be wise, so she ditches him, crashing a posh party in search of bigger fish to wry. And, she lands a whopper – John Barrymore, a millionaire who sees right through her disguise, hiring her to woo away the charming wolf who has been schtupping his wife.

Midnight is a Cinderella Story but with a mercenary heart. Colbert is no virginal princess. She doesn’t really deserve Barrymore’s fairy godfather nor Ameche’s noble prince. Yet, even a gold digger can find true love and a happy ending in Wilder’s usually pessimistic worldview. Favorite scene: Ameche rallying his brethren of drivers to scour the city and find his lost love. Imagine a rain soaked city full of eager cabbies. For anyone who’s ever tried to hail one of the chariots during inclement weather, you know this is something miraculous that can only happen on the silver screen. 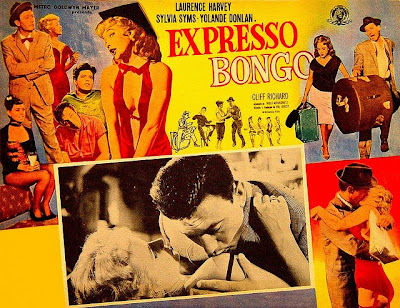 
We now move from ‘30s Paris to hopping ‘50s London. Really hopping. Ten years before it actually started swinging. Bongo is a strange hybrid of The Sweet Smell of Success and Absolute Beginners. A 1950s, rock ‘n’ roll exploitation flick that must be seen to be believed.

Lawrence Harvey is a sleazy Soho talent scout looking for the next big star to leech onto. His stripper girlfriend, who usually just throws a coat over her work clothes, takes him to a hipster coffee house, where he accidentally discovers the next big thing – a bongo playing Cliff Richards, the Brits’ answer to Elvis. Changing his name to Bongo Herbert, Richards quickly rockets to fame. To fame, but not to fortune, ‘cause his deal has Harvey getting fifty percent of all their profits. To get out of this devilish contract, Bongo must channel his own inner sleazebag and out hustle the long-time hustler. Luckily, he has an aging American pop star girlfriend to help him maneuver.

It’s chock full of great tunes, snappy patter and hot, world-weary chickies who can double cross with the best of them. This is one of Harvey’s finest performances -- a wheeler-dealer who could give Sidney Falco pointers in the art of the schmooze. The cinematography of London’s nightlife is as lush as anything in Night in The City. Think of it as Teenybopster Noir! 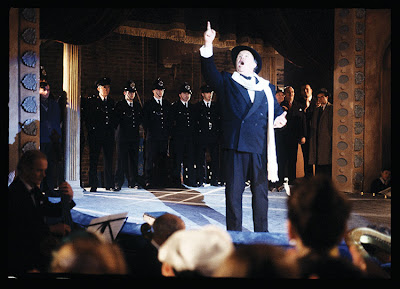 
When ya think of Ned Beatty, a tax-evading Irish Tenor in hiding might not be the first image that springs to mind. You’ve got that mental picture of him squealing in Deliverance; not singing sweetly like a celtic angel. Hear My Song will finally erase that scene from your memory banks once and for all. It’s one of my all-time favorite movies and a cure for all that ails you. Sure, it’s the overly-romantic-Hollywood- magical-roguish-sentimental Ireland drenched in dewdrops and Guinness that offends my officially Irish mates, but who really wants anything that smacks of reality when you’re really, really depressed and need STAT movie therapy? If you like Local Hero and I Know Where I’m Going (Okay, those are set in Scotland, but I don’t know much about geography.), you’ll fall in love with this little charmer by Peter Chesolm, a director who would go onto the vastly underrated Funny Bones, the wonderful The Mighty, the whimsy dervish of a Romcom Serendipity and somehow end his illustrious career with the Hannah Montana Movie. ARGGGHHHHHHHH!!!!!!

A sleazy cabaret promoter (Adrian Dunbar) in Liverpool books the famed, exiled singer, Josef Locke, to save his dying club and win over his future mother-in-law who just happened to have dated him back in the ‘50s. Turns out the horn-dog singer is a talented imposter, who takes advantage of the nostalgic, still pining mum. Thus, this leads to the trademarked Asshole’s Journey of Redemption as Dunbar goes on a wild search through rural Ireland for the real Locke, a man who doesn’t quite want to be found. Especially cause ex-Man From Uncle, David McCallum, never gave up his This-Time-It’s-Personal hunt.

What I adored about Jeff Bridges in Crazy Heart is that not only did it show him sweating on stage, but loving what he’s doing, connecting to his audience, having a blast like a kid jamming out for the first time. When Beatty raises his arms and lifts his voice, you see a performer whose gift was stolen from him, finally reclaiming both his talent and his greatest joy. His eyes twinkle like 2,000 years of collective Christmases. If you are not moved by his triumphant return to the opera house, you are surely made of stone and should immediately be sent back to the quarry or the Medusa’s lair that turned you.

Michael Stark has had his screenplays optioned by lots of important people, but he’s also taught English in Barcelona, imported art from Russia, worked for Wall Street and the UN, been a minister and a professional rock-and-roller… He’s been everywhere, man. Don’t freak out or anything, but he’s probably standing behind you right now. These days he juggles his screenwriting with his blog and his bookstore. Check ‘em out!