One final Hero Project essay has spilled over from last week…

Of course, it’s hard to compare the plot twists of different movies made in different times with different concepts. If only there were a way to scientifically study the effect of good or bad plot twists in a pure environment, eliminating all other differences… Oh wait, there is! Here are two movies made the same year with very similar stories. One had an underwhelming twist, but the other pulled it off very neatly.


2005 saw not one but two movies about confident career women who board overnight flights only to find themselves the target of an international super-criminal. In both cases, he has been watching her for weeks, hoping that, by endangering one of her family members, he can force her to help him with a bomb plot. The part of Goofus in this pairing is played by Flightplan. In this pseudo-remake of Hitchcock’s The Lady Vanishes, Jodie Foster goes to sleep on an international flight and wakes up to find that her daughter has disappeared. The one friendly face who helps her out is a flight marshal played by Peter Sarsgaard, but, of course, he turns out to be the bad guy—after she runs around in a panic for a while, he tells everyone one else that she’s a hijacker and they have to pay her off. He doesn’t let her in on the plan, and she doesn’t know that he’s framed her, which keeps too far behind the audience for way too long.
Ultimately, this is another situation like Total Recall, where we discover that all or our hero’s clever actions were totally predicted by the villain, weeks in advance, and everything she’s done has merely fulfilled his plan. But for the life of me I can’t spot the moment in which his plan falls apart. She finally realizes that everybody else is speaking to her as if she’s the terrorist and so she demands that everybody but Sarsgaard get off the plane. This hardly gives her the upper hand, but it seems to baffle him, and while he thinks about it, she whaps him in the head with a fire extinguisher. Then they chase each other around the plane until he dies.

Jodie Foster is hardly the worst possible pick to be the heroine. In fact, she designed the plane, but that knowledge doesn’t seem to be either the cause or the solution to her problem, as far as I could tell. When she should be succeeding due to those special skills, she instead relies on blind luck or predictable reactions. We never know why she was chosen to be the target of this elaborate plot or what unpredictable personality trait allowed her to get out of the trap. And there’s certainly no “Wrong Person to Pick On” moment.
Goofus did everything wrong, but, as usual, Gallant got it right. I’ve already written up Red Eye as an Underrated Movie. As you may recall, Rachel McAdams is a hotel concierge who rushes through an airport while chatting on the phone with her overprotective dad (Brian Cox). Though she’s coy, she slowly gets to know her cute-guy seatmate (Cillian Murphy), who claims to know women so well that he can guess everything she’ll do, which, despite herself, she finds charming… But it soon turns sinister: as soon as they take off, he admits that he’s been watching her for weeks and he’ll have his men kill her dad if she doesn’t call her hotel and help him arrange an assassination. 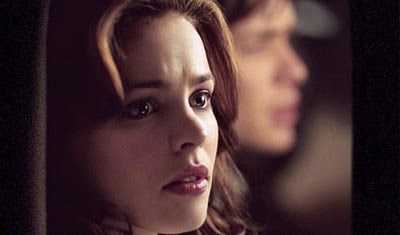 McAdams tries a number of clever stalling tactics but eventually it all comes down to a final do-or-die moment. All along, he keeps reminding her that he knows everything about her from watching her. But she has a secret. And this secret doesn’t come out of nowhere, either—it sheds new light on everything we’ve seen so far (over-protective father, wariness about flirting)… Her secret is very simple: She’s been the victim of random violence before, and she promised herself that next time she would fight back. That’s it.

As hidden qualities go, it’s not much, --it’s not like she’s secretly a navy SEAL-- but it’s enough. We see the moment Murphy realizes that he’s misjudged her, that she had something he couldn’t see from afar. This was the wrong person to pick on. It’s a nice moment, because it works on many levels—it’s a plot turn and a character reveal and a theme moment. It foils the villain’s plan but it also refutes his worldview—he has contempt for who she is and what she is (a successful young woman) but he learns the hard way not to make easy assumptions about his targets.
Anybody can become a hero, but they can’t become a hero by doing what anybody would do. They have to succeed because of something unique about them, not just because you put them up in a tree and threw rocks at them.
Posted by Matt Bird at 10:52 PM