The Hero Project #24: He Knew You Were Going To Do That! 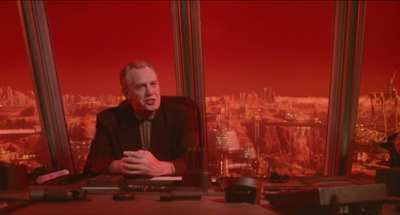 All this week, I’ve been talking about the false allure of a certain type of plot twist—those moments that jack up the conflict and intensify the main character’s motivation, but actually harm the movie by making both the hero and the villain weaker. One version of this twist is a particular pet peeve of mine…

I call it the “everything the hero has done is actually part of the villain’s plan” moment. I mentioned before that I always want to send a shiver of dread up the script-reader’s spine and pull the rug out from my characters with a big reversal. Well there’s no bigger reversal, I’ll admit, and it’s an undeniably chilling moment: All the heroic actions we’ve been cheering for are suddenly undone! Even worse, they’ve all been exactly what the bad guy wanted to happen! All of the clever things that the hero has done turn out to be totally predictable—the villain obviously knew in advance everything the hero was going to do. In fact, they were counting on it!

But these moments are risky. Not only do they weaken the hero, but they’re often very hard to believe. You start thinking back through the movie and trying to imagine how the villain could have guessed the hero’s every move. And they cause another problem as well: if the villain really planned this far in advance and predicted everything, then they must be a super-duper-genius! So how will they ever lose? Their plan so far has been utterly brilliant, so if it falls apart now, it had better be for a very good reason.

And that’s where these moments always fall short. So far the hero has done nothing but blunder into the villain’s elaborate trap. They’ve been ten steps behind. Now they need do something so brilliant that they instantly leap eleven steps ahead. But, inevitably, the hero gets out of it by doing something utterly obvious. The same villain who predicted their every move up until this point fails to realize that they’ll fight back after the big reveal. 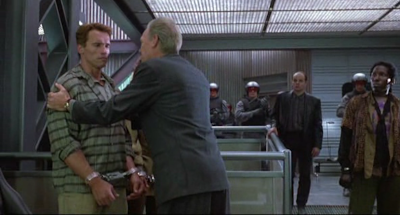 I first noticed this problem in Total Recall. Nice guy Arnold Schwarzenegger goes to Mars and winds up leading the mutant revolutionaries against the big bad corporate overlord (Ronny Cox). But at the last moment our hero gets the mutant leader killed and gets himself captured. Then he finds out that his whole revolution was all part of Cox’s plan. Even worse, Cox’s partner was Schwarzenegger himself—he’s actually a bad guy who has had a false heroic personality implanted in his brain in order to infiltrate the good guys! Twist! 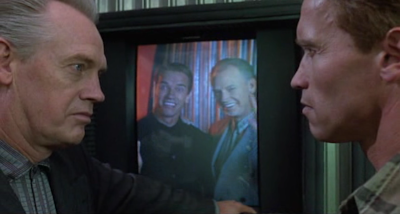 Cox successfully set this all up over the course of “a year’s planning” and the heroic version of Schwarzenegger, unaware that he’s actually a bad guy, walked right into the trap! Now all Cox has to do is restore Schwarzenegger’s evil personality. So he straps Schwarzenegger into the “re-evil yourself” machine, kicking and screaming the whole way. Cox cackles for a while and then leaves the room...

What could go wrong now?? What’s the one thing Cox didn’t count on? Well… nothing much. Schwarzenegger keeps struggling and gets his arm free. That’s what goes wrong. Cox guessed his every move a year in advance, but it never occurred to him that Schwarzenegger might try that. Cox just went from world’s smartest villain to world’s dumbest villain in about two minutes! 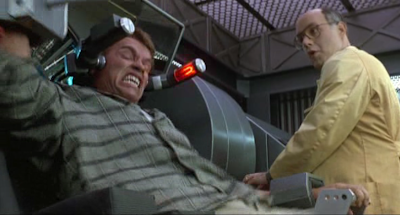 Okay, this is getting a little long, so we’ll push the big conclusion back to next week. Twist!
Posted by Matt Bird at 8:54 PM

Like most Bond movies, WHY OH WHY, do the bad guys always tell Bond their diabolical plan? Never makes sense to me.