The Conclusion of Pilot Week: Flashback to Flashforward 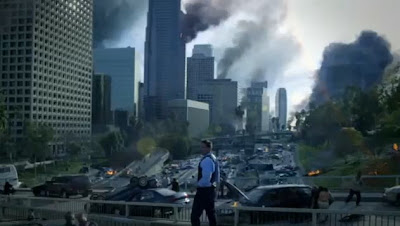 Yesterday in the comments a certain Steve B wondered how I could watch “The Event” when it’s sort of a low-rent “Flashforward”, which, he pointed out, had a better premise but crashed and burned in the second half of its single season. Since this has become an unofficial “Recent Pilot Week”, let’s flashback to that pilot and I’ll explain why that show had already lost me by this point in the season. (Next week: more Hero Project!) I would say that “Flashforward” crashed and burned during its first episode. Quite literally. I began to lose confidence when they showed L.A. burning because everybody fell asleep for three minutes, leading to hundreds of car crashes and planes dropping from the sky. This lost me. In the real world, if everybody on a plane dropped off the sleep, unless it was touching down, it would keep flying just fine. Most cars would slow to a stop and dent each other in low-speed collisions, unless they had cruise control on. In fact, a car or plane would be the safest place to be, other than bed. The major danger would be head injuries for those people who were walking or standing. Then they cut to London, and made sure to show that Big Ben was burning in the background. I turned to Betsy and said, “If the next scene shows the Eiffel Tower burning, this will officially be ridiculous.” Guess what we saw in the next scene? Nevertheless, later that same day, we visit one of our characters, an L.A. emergency room doctor, and she's enjoying a generous amount of down time, chatting casually with other characters about what's going on in their everyday lives. Like all those casual chats people had in downtown Manhattan on 9/11. Also: people learned about the crisis by gathering around the display of TVs all playing the news in a TV store window on Main Street in L.A. Wait, what? Did the writers not notice that America no longer has TV stores? Or Main Streets? or shop windows?
But even after all that, we didn't really give up on the show until they visited the creepy villain’s lair filled with severed doll parts (a scene repeated in the pilot for “Blue Bloods”, alas.) “Flashforward” had a great, existentially weighty premise, (What would people do if they had seen disturbing visions of their own future) but it would have required some very thoughtful filmmaking to pay it off. That didn't happen. “The Event” is just as cheesy as that show turned out to be, but I find it far more forgivable because it doesn't try to carry any philosophical weight that it can’t support. It’s just a whiz-bang hour of popcorn television. I fully expect it to become too silly to watch soon, but that hasn’t happened for me during the first two hours.
Posted by Matt Bird at 12:53 AM

Personally, I found that the show supported its "philosophical weight" much more easily than it was able to pull off the conspiracy. I looked past the silliness you recognized and found the first half fascinating for its examination of how this glimpse of the future would affect both individuals and society. I felt the writers did an exemplary job with that part of the story.

Unfortunately, they still had to explain why this had happened, and they proved completely inept at the thriller aspect of the show. For the first half of it's only season, the philosophical half of the show was able to carry twice the load, and kept me happily watching. But as the show rolled on, they were forced into their weak spot and the show crumbled into awfulness very quickly.