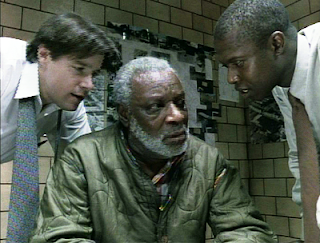 Yesterday I talked about TV’s current obsession with evidence, but it wasn’t always thus. If this has been the “evidence decade” then the ‘90s was the “talk decade”. At its best this gave us shows like “Homicide”. The third episode of that show, “Three Men and Adena”, written by my old boss Tom Fontana, is possibly the greatest single episode of any American TV show. It’s almost all in one room: two detectives question a creepy old man about (once again) a dead girl. They parry, dodge and thrust, they gain the advantage and then lose it and then gain it again, but they never get anywhere. He doesn’t confess, they have no evidence, and they have to let him go. They never know whether or not he did it and neither do we. All we know is that we’ve seen a great hour of TV.

But “Homicide” had the luxury of playing out consequences over the long term. (Kyle Secor’s character never got over that case.) On episodic shows the talking cure was more problematic. After Silence of the Lambs came out in 1991, fictional policework became synonymous with “getting inside the mind of the killer”. It got to the point that there were two shows on simultaneously in the late ‘90s that both featured detectives who were so good at their job that they could literally know what killers were thinking: “Profiler” and “Millennium”. The rule was simple: the more you verbally sparred with the killer, the closer you got to understanding them, and then breaking them. 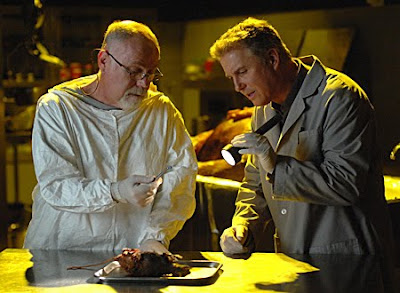 It was time for empiricism to make a comeback. When it did, it hit like an atom bomb, starting with “CSI” in 2000. In the first episode, Grissom is collecting evidence and building his case. Someone asks him, “But aren’t you even going to talk to the guy?” Grissom answers, “Why? He’ll just lie to me. The evidence never does.” It made sense. A year later, the new empiricism spread to medical shows with “House”, which copied that exchange almost word for word in its own pilot, except that House was talking about lying patients and trustworthy medical tests. 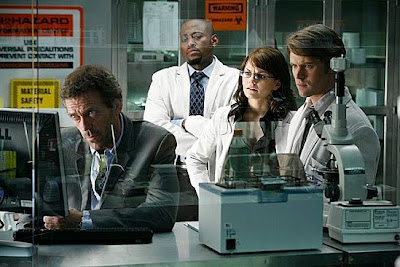 I don’t want to get overly political here, but it’s hard not to connect these two trends to larger cultural and political phenomena. The ‘90s were the decade of “I feel your pain.” Listening and empathy were our preferred solutions. Then came the polarization of the ‘00s. Both the supporters and the detractors of America’s response to 9/11 had the same motto: “judge deeds, not words,” even though they meant it in opposite ways. 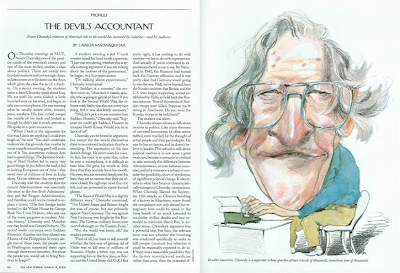 The New Yorker magazine spent most of 2002 trying to drum up a war in Iraq, through a series of neocon editiorials and falsified lead stories that were later debunked. The March 2003 issue marked the long-hoped-for beginning of the war, and it was kind of a victory lap. Along with their report on the “shock and awe” bombing, they ran a nasty hit-piece on one of the war’s naysayers, Noam Chomsky. Breezily dismissive and dripping with contempt, the piece didn’t actually tell us much about Chomsky, but it did reveal a lot about mindset of the magazine’s editors. Here’s the centerpiece of their criticism: 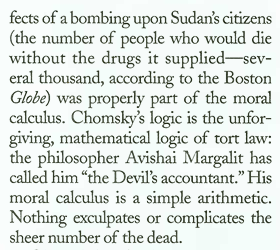 In short, they were infuriated by Chomsky’s insistence on looking only at the result of a bombing, without considering the justifications that the government offered. Why ask the president why he’d bombed the Sudan: he’d just lie. The evidence doesn’t. The New Yorker was baffled by Chomsky’s newfound popularity in the neocon age, but he was just echoing a larger cultural shift. He’s the spiritual cousin of Grissom and House. Of course, it worked the other way as well: the right was equally unwilling to listen to Al Qaeda’s stated reasons for their attack on America. Both sides concluded that the war of words wasn’t fun anymore when real people were dying.
But now we’ve moved into a new era. “CSI” and “House” were bracing and exciting shows when they first appeared and the newfound focus on empirical evidence was a welcome shift, overall, for TV procedurals. But network execs have gotten addicted to the “closure” that evidence brings, and procedurals have gotten stale again. It’s time to rediscover some ambiguity.
Posted by Matt Bird at 12:01 PM

I needed to draft you one bit of word so as to thank you yet again relating to the lovely principles you have shared on this website. It is simply shockingly generous with people like you to offer openly just what numerous people could possibly have offered for sale for an e-book to generate some cash for their own end, primarily considering that you might well have done it in the event you decided. These tricks in addition acted to become a great way to recognize that many people have similar passion really like my very own to learn good deal more when considering this issue. I'm sure there are a lot more pleasant times in the future for individuals who view your blog. brand consultancy singapore