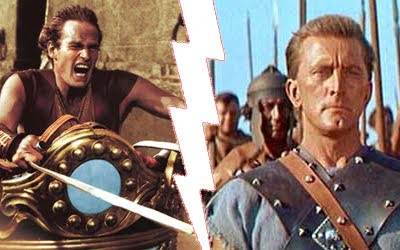 Yesterday, I talked about how reading a bunch of myths made me question Joseph Campbell’s premise that hero stories were inherently empowering. Instead, many stories went out of their way to make it clear the hero did not actually exceed expectations. They were descended from Gods, their coming was foretold, and there were portents at their birth. Weren’t they just fulfilling their destiny? Ah, but there’s a twist: in story after story, there is some problem right after they’re born requiring that they be sent away and raised in humble surroundings.

This is a neat trick, in that it allows the hero to be both a self-made man and a self-fulfilling prophesy at the same time. Yes, the storytellers seem to say, this person grew up with nothing, and earned everything they have from scratch, but they are nevertheless of noble birth, so they always deserved this exalted place, unlike you. (Of course, it’s possible to assume that the self-made part of the story came first, and it was only years later some king insisted that the portents be added to the beginning, so as to make it clear that no one should should actually try to rise beyond their station.)

So is the purpose of storytelling to empower the reader, or to keep the reader in their place? Well, it depends on the story. This is the difference between Ben-Hur and Spartacus. Ben-Hur was the big Oscar winner of 1959, but Howard Fast and Darlton Trumbo didn’t find it particularly inspiring, so they responded with Spartacus in 1960. There’s an exchange in Spartacus that seems to be aimed directly at Ben-Hur. Throughout Ben-Hur, people keep going on and on about how unfair it is that the hero has been enslaved even though he is of noble birth. Spartacus is also a slave who rebels, but he frees every slave he meets and leads his newfound army against Rome. Along the way, Spartacus meets with the merchant Tigranus, who is very impressed by all that he has accomplished. He eyes Spartacus narrowly and ventures… 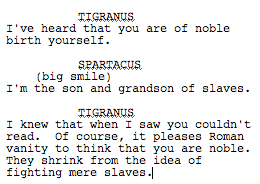 Old school leftists Fast and Trumbo (this was the movie that broke the back of the blacklist) were specifically shooting down the idea that only slaves of noble birth deserved better.

So which is a real hero? Does a hero merely discover inborn powers or do they create skills where none existed before? Both traditions continue today. This is the story of Superman vs. Spider-Man. The Annointed vs. the Everyman. Now I personally prefer Spartacus over Ben-Hur, and Spider-Man over Superman, but it’s not always so simple. What about Keaton vs. Chaplin? I prefer Keaton’s comic persona over Chaplin’s (though I love them both). But Chaplin is the everyman, starting from scratch, while Keaton usually relies on his under-appreciated native abilities.

This brings us to another way to phrase the question: Does a good protagonist go from zero to hero, or do they merely find a way to be recognized for the skills they already had at the beginning of the story? Let’s pick up there tomorrow…

Since days I read your great blog and find loads of my own questions addressed. Now, I can't resist ...
I guess, the problem after the birth isn't a neat trick in the way you describe it. It's not about skills or deserving an exalted place. In my opinion it is a trick to create a sense of injustice that immediately leads to identification with the hero no matter if he's skilled or of noble birth. ...and no matter if the audience is rich or poor, black or white, whatsoever. The hero don't need to "save a cat" but someone needs to "kill one of his cats" no matter when and where - even before his birth but not later than the end of Act 1.
Let's think about Snow-White as a poor girl not being sent away from a place of a noble birth. Well, she is as beautiful as we know it but it doesn't matter until the Queen tries to kill her. The warning of the huntsman would become a statement of injustice. We would identify with her in right that moment. Everything else in the fairytale could stay the very same - the dwarfs, the loving prince, the apple, our joy to see the Queen finally punished. Snow White needs just one skill - to be a person who not deserves to be killed. Therefore she never tries to use a sword or poison or witchcraft or the prince.
But Snow White isn't the heroine of a killing-plot. She is the heroine and protagonist of a survival-plot who self-sacrifices for the dwarfs as a housewife. In return the dwarfs try to hide and save her. But in the end a prince appears and has the skills and the power to end that injustice and punishes the Queen.
Sending Oedipus away is an injustice but of course he has to learn how to use a sword before he comes back.
Well, throughout Ben-Hur, people keep going on and on about how unfair it is that the hero has been enslaved. Spartacus is also a slave who rebels, right. The noble birth doesn't matter, the enslavement matters as well as the character of the slave.
I guess, it would be very interesting to analyse the changes of the Snow White or Alice heros.

Alice in Wonderland (95')
minute 23 - Alice learns about her role in the Oraculum, the Bandersnatch follows to kill her in the name of the Queen
minute 45 - Alice enters the castle of the Queen where everybody want's to kill her
minute 67 - Alice gets the sword, escapes with the help of the Bandersnatch, reaches Marmoreal and - once reborn - she is ready to become a leader and warrior and to kill the Jabberwocky
When did she learn to use a sword? Never. It's just a dream.

In other words "This is Sparta!" Spartacus was probably the Zeitgeist of JFK and the black movement. Post-9/11-heros may be different but someone has to "kill one of her cats" first.
This way we even swallow that the Spartans took the children away from their mothers an beat them until they became patriotic warriors. Unthinkable for the children of Spartacus.

The sword can be literal or it can be a metaphorical, i.e., any kind of power the hero or heroine has to acquire and master to defeat their antagonist.