The Hero Project #3: Can Heroes Really Start At Zero? 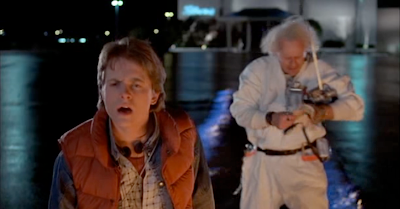 As I was saying, the more I thought about it the more I realized that a lot of my ideas about heroes were half-baked. I was getting some surprising notes back when I tried to sell my scripts, like “the hero is too much of a loser at the beginning.” But why was that a problem? They say that your character should have to radically transform himself in order to triumph. They say that where he begins should be 180 degrees away from where he ends up. So shouldn’t he go from zero to hero? Isn’t that common?

But the more I looked at it, the more I realized that actual “zero to hero” stories are rare. Even in stories where the hero is totally unprepared for the problem, they usually fall back on other skills (skills that we’ve seen since the beginning of the movie) to triumph.

The turning point was when I recently re-watched Back To The Future. (I hadn’t seen it since the theater, 25 years ago, and I was surprised at how well it held up.) I had remembered this as a classic zero to hero story. Marty McFly thinks of himself as a loser, certainly. And he’s totally unprepared for the problem he encounters: he’s thrown back into the past with no special knowledge of time travel or life in the 1950s. But, like most heroes, Marty has a hidden reserve of “special skills,” and those are what he relies on to get out of trouble, over and over. Most of his skills, like skateboarding and playing hard rock guitar, shouldn’t apply to 1955 because they don’t exist yet, but he figures out how to use them anyway, even if he has to invent them. 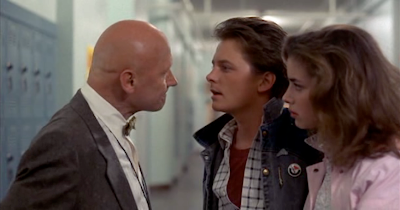 I realize that this makes me sound slow on the uptake, but I hadn’t really noticed before that heroes tend to get out of trouble in the second act using talents they already displayed in the first act. Marty thinks of himself as a loser, and we feel empathy for his pain, but right from the beginning, he’s actually sort of a bad-ass. He has a band! He mouths off to the principal! He grabs onto the bumpers of cars as he skateboards to rocket down the street, even a cop car! But wait— shouldn’t these elements keep us from empathizing with Marty’s vulnerability? Nope— I realized that they have the opposite effect. The bad-assery makes the vulnerability sympathetic. We feel bad about the hero’s low self-esteem because we disagree: Can’t you see how cool you are, Marty?

Now I try to keep track of something I call “The Badass-to-Vulnerability Ratio”. The more popular movies I watch, the more I realize that, between the toughest tough guys and the dweebiest dweebs, the variation of that ratio is about 5%. All popular movie heroes have a lot of badassery and a lot of vulnerability, because you need a lot of both to be sympathetic. I’ve been doing it wrong.

But wait—aren’t there any heroes without special skills? I’ll pick up there tomorrow…

In both cases, they have no special skills and no bad-assery at all in the first act.

But in most cases you're right -- the skills do come back. It's so predictable to do that now though. When you see that a character knows how to do something unique, you're just waiting for it to come up again.

I agree, Jeff, it's very hard to set up the skills in advance without giving away what happens later. I'm taking my own sweet time in laying this thesis out, but soon I'll get to those movies that do work without skills-- as you point out, they tend to be horror movies. This makes sense: no skills = high body count.

I would like to exchange links with your site cockeyedcaravan.blogspot.com
Is this possible?