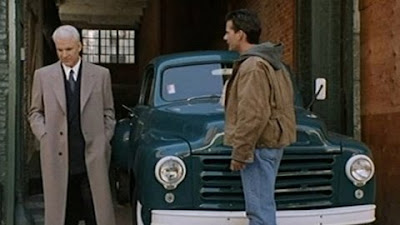 Yesterday I talked about how protagonists rarely drag themselves all the way from zero to hero. Guys like Marty McFly in Back to the Future may seem like they’re starting at zero, but they actually get through the movie by using skills they already had. Those skills were the reason we decided to trust them in the first place and we love it when they pull those skills out again in difficult situations.
But is this an immutable law? Do all heroes need special skills? After all, I love Back to the Future, but it is kind of cheesy --And it feels especially cheesy when he invents the skateboard and hard rock. Those scenes are fun, but you also roll your eyes a little. I decided to look for some more dignified zero-to-hero movies to test this dilemma out…
When I first watched David Mamet’s 1997 thriller The Spanish Prisoner, I found it to perfectly serviceable but somehow unsatisfying, though I couldn’t have told you why. I probably never would have gone back to it, but I just re-watched it because I was working on a treatment that had a similar dynamic. Once again, I found it rather lifeless, but this time the reason why was obvious:
Campbell Scott has invented a process that will revolutionize his industry. Steve Martin is a con man who tricks Scott into stealing his own formula and handing it over, then frames him for murder. Scott blunders into the trap, then muddles his way out. Each individual scene works fine. Once Scott realizes that he’s been tricked, he does a lot of poking around, investigating, running through alleyways, etc. He is a true everyman. He shows no special skills in the first act, and he doesn’t need them to get through the rest of the movie. He just needs to be a little smarter, a little savvier, and a little more courageous in order to get out of the trap. He gets by.
Compare this to Harrison Ford in The Fugitive. There’s only one scene of Ford before his wife is killed, just enough to show three things:
Like Scott, Ford is framed for murder. He’s arrested and has to escape with Tommy Lee Jones hot on his heels. How does Ford get out of it? He keeps going back to his special skills. He doesn’t transform into a noir hero. Instead, he finds a way to use his three skills to solve the problem. He spends the whole movie in and out of hospitals, relying on his friends, and not taking any crap. And we care about him much more than we ever care about Campbell Scott. 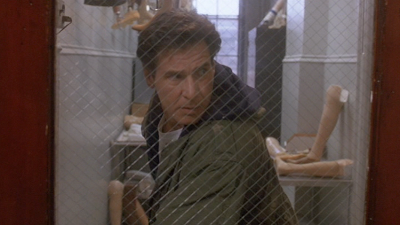 But isn’t it a bummer to think that you can’t really empower an everyman? I mentioned that I prefer Spartacus to Ben-Hur because Spartacus starts out at the bottom, but even there, he’s already a total bad-ass at the beginning of the movie. So if movies can’t actually get from everyman to superman, maybe the actual hero’s journey is much shorter, simply from “heroism unrewarded” to “heroism fulfilled”? Tomorrow I’ll try to figure these categories out by looking at a hit movie where nobody agrees who the hero is…
Posted by Matt Bird at 10:03 AM

Matt, are you sure this isn't a question of the subtleties of casting and acting more than screenwriting? Aside from the doctor part, the characteristics you ascribe to Ford's character in THE FUGITIVE are more or less the actor's public persona. He's like that in every movie. Campbell Scott, too, is usually rather more of a milquetoast. Compare the protagonist of THE SPANISH PRISONER to Mamet's more satisfying HOUSE OF GAMES and you will also see that those inchoate qualities of heroic toughness are much more apparent in Lindsay Crouse -- but maybe more in her face than in any bit of scripting.

Certainly, star power goes a long way. The audience already trusts Ford to kick a little ass before they even enter the theater. Campbell Scott, not so much.

But look at Air Force One. I barely remember that movie, but, as I think back, Ford's character seemed to suffer from a lack of skills. True, we see a speech at the beginning that lets us know that he proactive and uncompromising, and then he uses those skills to beat the bad guys, but it's wasn't enough to convince me that he could take out a plane full of terrorists. I remember when I saw it thinking that Ford never really did anything clever, he just kept gritting his teeth a lot.

Matt, I'm not the biggest fan of The Hero's Journey, but I think you're misunderstanding it a bit.

In Back to the Future, the mentor is Doc, and he gives Marty the camcorder before the call to adventure (traveling back in time). Without that camcorder, he could not survive.

When Marty passes tests, he gets gifts. When he successfully coaches his dad to hit the bully, he is rewarded by being allowed to perform in front of the school -- something he wishes for at the beginning of the movie.

If there is any new skill in this movie, it's learning how to believe in his father. He has to hand his fate over to him -- something he never would have done at the beginning of the movie, but is forced to do in the middle.

Anyway, the reason I don't really like it is along the lines you're throwing out: a chosen lucky one gets gifts and then succeeds. Whoop-dee-doo. Make Zeus my guardian angel, and I'm sure I'd do fine too.

Your blog is incredibly awesome, btw.

Oh, I understand it, I'm just fudging it a little in order to make a point. Isn't that what the internet is all about?

(Now *that's* what the Internet is for, Matt -- getting picky about Star Wars references.)