Storyteller’s Rulebook #37: Why Do Hamlet and Batman Delay? 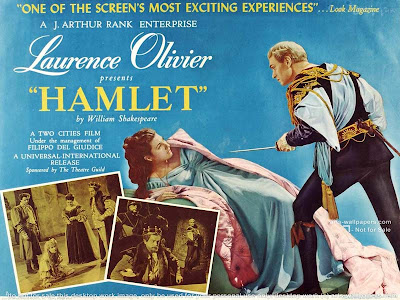 Last week, I talked about how hard it hard it is to get the hero and villain to both try to kill each other in thrillers, then I talked about how creature features actually make more sense. But there’s yet another extension of this problem that I haven’t covered yet, so allow me one final column on this topic--

The big difference between a murder mystery and a thriller is the amount of time that your hero and villain are openly confronting each other. In a mystery, the villain keeps a low profile and there’s usually not a confrontation until the very end. In a thriller, the thrills have to start by about 30 minutes in, so by that point the hero and the villain usually have an open antagonism.

So why isn’t the movie over ten minutes later?

The answer is the that the hero and villain confront each other, then take some time off, then confront each other again, then cool off some more, then finally gather for their final showdown. Sometimes, in more ambiguous thrillers, this wavering makes sense, but just as often, both hero and villain know right away that only one of them can remain standing, so why do they keep disengaging? Why don’t they finish each other off the first time?

The most famous example of this, of course, is Hamlet. Why does Hamlet delay? There are several reasons given in the plot: First he wants to get more evidence, then he has religious doubts, then he spends two acts extricating himself from an elaborate death trap. But ultimately, Shakespeare never really explains it, so this is considered to be the key question that the director and actor must answer for themselves.

But ultimately we trust Shakespeare, so we give him the benefit of the doubt. If we can’t find enough justification for Hamlet’s delay in the text, then it must be our fault. But we don’t give as much leeway to the people who write Batman comics, who face this problem month after month. In almost every single issue, Batman confronts the villain inconclusively a few times before they finally have it out. And this is the hardest thing for me about writing thrillers: How do you get out of these early action scenes in inconclusive ways? Why would either side walk away without killing or arresting the other? I’ll tell you how: you write a bunch of scenes like this one, from Detective Comics #437: 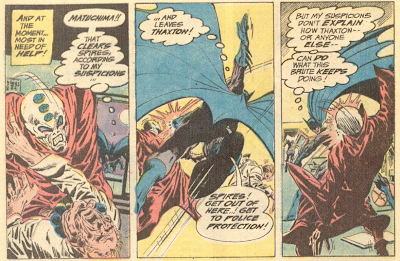 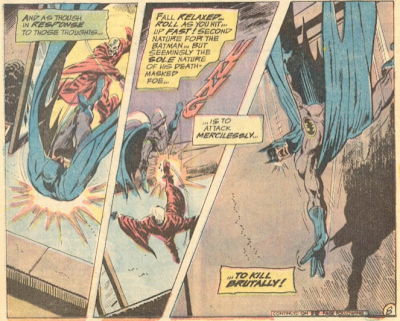 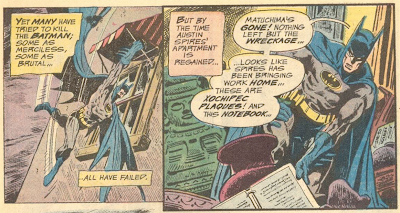 I myself have written variations on this scene: “Villain throws hero out of a window, can’t check to see if he’s dead, villain is gone before the hero comes back.” It’s better than “Villain puts hero in a death trap, assumes that it works, doesn’t bother to check.” But it only buys you a little time until you have to write your next inconclusive confrontation.

Matt, is a thriller story simply a machine for delaying a showdown between black and white hats? Once again, your job as a writer is to not just write the same thrown-out-the-window scene again and again, but to make it new. I can think of a number of fresh strategies from the best thrillers of the aughts. You can compress what we expect to see and fast-forward to the next beat, in the manner of newer HK and Korean genre films like INFERNAL AFFAIRS and SYMPATHY FOR MR. VEGEANCE, where everything that happens in the first 40 minutes of these films would be the entire arc of most American pictures. These films also sometimes play with shifts in identification, as antagonists become protagonists halfway through. You can use elision, repetition and puzzle structure to keep the hero and the bad guy working as hard as the audience to keep up -- PRIMER, MEMENTO, SHADOW 19, SOURCE CODE. (In a lot of these puzzle films, the true antagonist is fate or the hero himself; hence the necessity of building in multiple stand-in bad guys) You can add a ticking clock and/or a contained space and pile on the antagonists, as in the two David Koepp NY thrillers PANIC ROOM and PREMIUM RUSH. Cut right to the showdown early on and then ask yourself what happens next.

Oh sure, a smartly-written thriller can avoid these awkward machinations, but you can't always be re-inventing the game. Sometimes you have to be willing to write meat-and-potatoes old-fashioned stuff, and that means that you have to know how to solve these classic problems.

But yeah, I guess that's my whole point here, really. Write something clever so that you don't have to have to resort to awkward fixes like these.

How about blackmail? That's a good one. The protagonist is blackmailed by the antagonist, which leads him to pursue a number of ineffectual half-measures before finally confronting the antagonist. In other words, you make "killing" the last resort, not the first and most obvious choice.