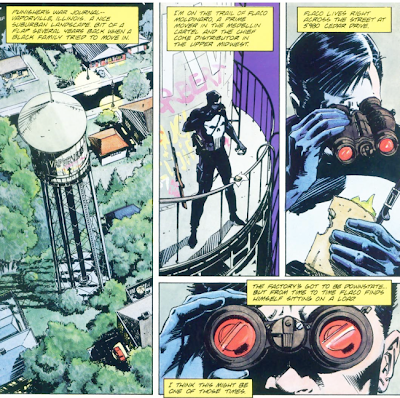 Like our president, I love Conan comics. And, like our first lady, I also love comics about the Punisher. (Okay, I’m just assuming that she loves Punisher comics, because, c’mon, who doesn’t?) But I don’t love movies about either character. They’ve rebooted the Punisher movies twice in the last ten years, and both times it was a flop. They’re making a new Conan movie now and it looks like it’s going to be bad.

On the surface, Conan and the Punisher seem like ideal candidates to make the leap to the big screen. Neither wears bright colors. They both exist independently of other heroes, with self-contained adventures and at least thirty years of great stories to choose from. They both have strong motivations and compelling personalities. That’s why Hollywood keep going back to those wells. But the wells are dry. What Hollywood is missing is that the fundamental appeal of both characters is one quality that movies are particularly bad at portraying.

As a teenage boy, I enjoyed each issue of “Conan” or “The Punisher”, but what I really loved was a whole stack of Conan or Punisher comics. The more you read, the cooler they became. To me, the appeal these characters was the quotidian nature of their adventures. The Punisher’s family was killed by mobsters. He hunted down and killed the mobsters. That’s very cinematic, in the blandest possible sense of that word. But that’s not why people read Punisher comics. He never even did that in a comic book. By the time we met him, his family was long dead and long ago avenged. What made the Punisher interesting was that he kept at it, long after his personal investment was satisfied. Likewise, Conan would rescue a terrorized village from an evil wizard, but he wouldn’t then ask the damsel on the sacrificial altar to be his bride. He would just move on to another village to casually do it again. 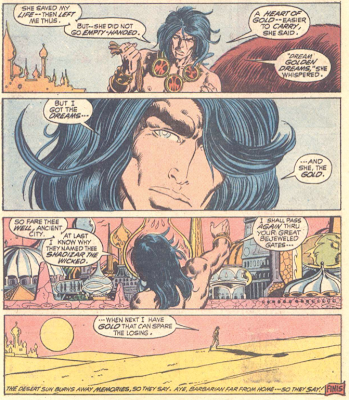 What was so cool about these guys is that they were so dispassionate. They were doing the sort of the things that other men do on a wild revenge trip, but they weren’t wild at all. They were calm, even bemused. They had turned their crusades into everyday jobs, complete with sandwich breaks. They would patiently make their plans of attack and dismissively dress down any revenge-seeking allies who got too hot under the collar. These guys had sang-froid.

But movies are terrible at showing dispassionate heroes. It’s been said that every movie has to be about the most important two weeks in a character’s life. When they make Conan movies, he has to have his own life ruined by the wizard and his own community has to be at risk. When they make Punisher movies, he has to let down his icy exterior and finally start to care again, dammit! And thus the whole appeal of the character is lost. Movie stars love to be cool, until they get on screen, when they love to lose their cool. (James Bond used to be the one exception, the one hero who was allowed to not get very upset by anything, but in the recent Daniel Craig movies even he has to doubt himself and cry. Not that I didn’t love Casino Royale, but still, can't anybody just be cool anymore?)

But… tomorrow… I’ll cover the one movie that gave us the closest thing we’ll ever get to a good Conan movie, even it was about another character entirely… when Cheesy Movies Week continues!