Storyteller’s Rulebook #30: Be A Good God 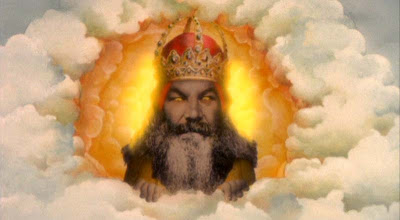 Here’s a depressing thing that you’ll sometimes hear writers say: “You know you’re doing it right when it’s not any fun anymore.” By the time you start saying that out loud, you may just be a burnout case, but it is true that the more careful you become, the less it feels like play and the more it feels like work.

Last week I talked about the need to know what every character did all day. When you first dream up a story, you don’t think about things like the career and hobbies of the character’s love interest. But eventually you admit that you have to start figuring out all those incidental character details, even if they don’t directly impact your larger story.
At first, you let yourself get away with expediencies like writing, “he goes home and she’s waiting there to talk.” And why not? It allows you to get started without having to do the tedious part of the job. Later, when you realize that everybody, even the cops who interact with your hero in just one scene, need to have individual personalities, it becomes less fun.
The biggest bummer is when you realize that you need to know a lot more about each character than you’ll ever show. You have to know everything that makes each character tick, even though your story will only reveal their surface actions over the course of a few days. That’s hardly fair! It was so much easier back when you could just toss in a generic wife, and a straw man villain, and a random hobby. It used to be that everything you invented wound up in the story.
Great fiction writers must know and understand everybody in the little universe they’ve created. They have to take an insider-perspective on every profession, really feel every character’s wants and needs, even justify everybody’s actions, at least long enough to write that character’s dialogue. Writers can create anything. Within our worlds, we are all-powerful gods. But only the really good writers go further, and become all-knowing gods. Only truly great writers go beyond that, to become all-loving gods. It turns out that being god is actually a pretty hard job, if you want to do it right.
Posted by Matt Bird at 11:42 PM