Storyteller’s Rulebook #28: Let It All Hang Out 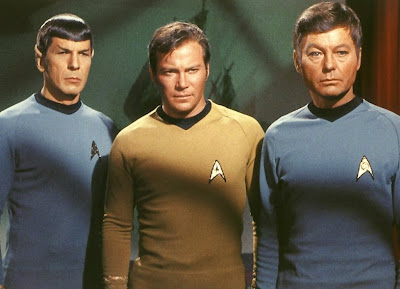 People like to make fun of how broadly drawn the characters were on the original “Star Trek” show (as opposed to the later shows, where the characters were much more even-keeled and, not coincidentally, rather dull). But the writers didn’t write them that way because they were too dumb to notice how extreme they were. They created such broad characters because it wasn’t really a realistic show about outer space, it was a symbolic show about inner space.

Every heated argument on that show was an externalized version of an internal debate, with the main characters representing extreme personifications of the voices we all carry around in our head. As Freud would put it, Kirk was all id, Spock was all ego, and McCoy was all super-ego. And, of course, many of the planets they went to represented real-life emotional challenges. Each episode was a metaphor for the internal debate within a person when confronted with a moral dilemma.

Remember the “House” episode (from before he replaced his original interns) where he was stuck on a plane treating a very sick passenger? He found that he couldn’t think clearly anymore without the chatter of his assistants in the background. In order to crack the case, House demanded that three of his fellow passengers act out the personalities of his three interns. He needed one to be self-interested, another to be skeptical, and the third to be compassionate. House was basically admitting that his interns had become the externalized versions of, once again, his own id, ego and super-ego.

The doctor had come to the same conclusion that all dramatists do-- it’s easier to work out a problem if you create a dialogue of extreme points of view.   This is why scholars are always able to find symbolism in fiction even if the author didn’t intentionally include it: because the most naturally dramatic dialogue comes from concocting an external conflict that also symbolizes an internal conflict. It’s just good writing.

This is also why most good dialogue in movies and TV isn’t necessarily “realistic”. It’s got a lot more on its mind.
Posted by Matt Bird at 10:59 PM

Right on. You had me at Star Trek, you won hands down with the House example. Great post.

Over the years, I've noticed that the movie Ferris Bueler's Day Off can have a real polarizing effect on people. I've always loved it, and indeed find it affects me quite deeply and positively. Others just react to what a self-involved jackass Ferris is, and what a simpering loser Cameron is. For a while, I wondered why I didn't have that same reaction. Eventually, I figured out that I unconsciously read the movie as a metaphor for my own subconscious -- I'm way too much Cameron, and need to give my inner Ferris freer reign.

Meanwhile, as to your House analogy, I see the same thing going on there not so much with House's underlings, as with Wilson. House is all id, and Wilson is all ego, and that relationship is the one that interests me in the show -- I am a Wilson who needs to access my inner House.