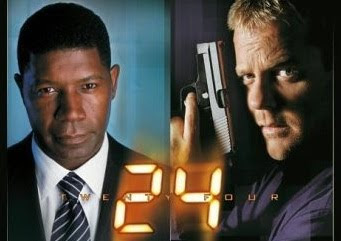 Yesterday, I talked about how the guys on “Star Trek” and the interns on “House” are each examples of one person split into three extremes. In those cases, each character embodies a different trait of a complete human being for the purposes of dialogue so that the divided self can argue it out and solve a problem. But what happens when you split up one person into two selves and keep them apart? Can two schizophrenic halves of a human being each solve their own problems?

I’ve mentioned before how I felt that the down-and-dirty politics of the recently-ended “24” were probably more realistic than most of us want to admit. One of the things that the show conveyed well was the fact that Constitution of the United States gives almost no power to the president. Congress is supposed to pass legislation, declare war, and control the purse strings. As my college politics professor liked to say, the only power of the presidency is the power of moral suasion.

One of the reasons I feel that the first three seasons of “24” worked so well was that the two co-protagonists, Keifer Sutherland’s field agent Jack Bauer and Dennis Haysbert’s President David Palmer, were two halves of one person, each masters of their own craft, but totally unable to do what the other did.

In the original format of the show Bauer and Palmer would each discover different sides of the same conspiracy and rigorously unravel them using opposite sets of tools. Bauer was a killing machine who could conquer any physical challenge, not just because of his superhuman physical skills but because, in situation after situation, he would refuse to consider the ethical implications and just do his thing, unencumbered by the moral qualms of his hand-wringing co-workers. This is obviously a disturbing concept, but at least the show (and Sutherland’s excellent performance) made sure that we felt how disturbing it was.

What made it work was that Bauer’s actions were counter-weighted by his equal-and-opposite mirror-self, President Palmer, who had a preternatural stillness and gravity that totally contrasted with Bauer’s physical violence. The only power Palmer had was the one power Bauer lacked: a thoughtful and abiding faith in the constitution. In the end, each hero would overcome their own half of the conspiracy, and indirectly save each other, but would remain mostly in their own separate spheres. Neither could survive in the other’s world. Taken together, they represented the fractured soul of post 9/11 America. Viewers would whiplash back and forth between two fiercely incongruous representations of what America could and should be without ever reconciling those contradictions. It was up to us to try to put them together to re-construct a whole human hero.
Posted by Matt Bird at 11:21 PM

I was listening to the TAXI DRIVER commentary by Paul Schrader today and he says something very similar about characters like Travis Bickle who carry a whole film and are in every scene. Part of the reason we never get bored with Bickle, Schrader asserts, is because he's at least 3 or 4 different people, switching between personalities in alternating scenes--innocent boy, avenging killer, misfit loner--and sometimes within the same scene.