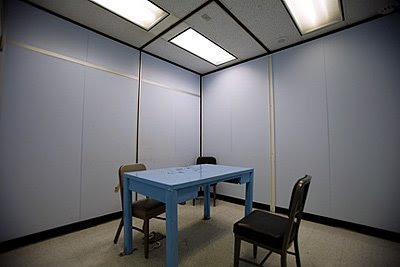 So I actually did what I suggested yesterday. I transcribed one of the interrogations from the excellent Bio Channel show, “The Interrogators”, into screenplay format.
What I learned: a ton. First of all, it was great to force myself to transcribe how different people form sentences. Class and status really are embedded in every word. Another thing I noticed was how differently people describe things when they’re lying from when they’re telling the truth. As for the case, you would think that a real case would be much more mundane than anything on scripted TV. Nope, we have a quadruple homicide, with the bodies stashed in the sewers, rooms full of blood, etc. This is an intense case with multiple suspects and twists along the way.
Ways in which this real interrogation was unlike movies or scripted TV:
Surprising ways in which this story WAS like a movie or scripted TV:
Posted by Matt Bird at 11:59 PM

I really enjoyed this post -- Keep writing. I read your blog daily now.

Wow. That's a great article, Matt. I learned a lot. Thanks.

I have an idea for a detective story in my head and these tips should come in handy when the main character (a PI who specialises in relationship cases) interacts with the police. (A friend of his is a ranking officer, so he gets away with a little more than a normal PI would, for example getting a bug he planted in a client's house tossed back to him rather than being charged with an illegal activity, which would normally be the case)

Of course since is his own field is not "murder investigation" or the like, the police are the people he calls if he's a witness to such an event.

Like St D. Harry says, "a man has to know his limitations."

It's disturbing for sure, but cops get people to confess to all kinds of things all the time. And Bobby's tactics are all legal, I think, even the morally squishy ones.


I mean, no crime show would dare write about this case, I don't think, it sounds too outrageous. Lawyers kept thinking it would be turned over on appeal. No, it was not.