Storyteller’s Rulebook #24: Throw Everything Into Relief

So this is turning into Storyteller’s Rulebook week, isn’t it? What can I say, I’m not in an underrated movies mood. Presumably I’ll get back to those next week. I’m thinking about doing Cheesy Action Movie Week. Yesterday's was long, so today's will be short: 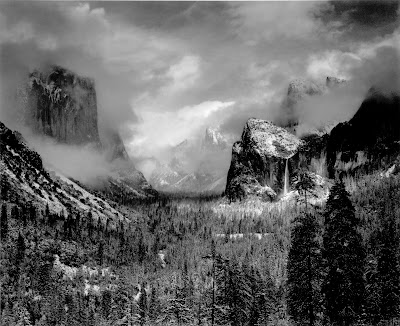 I’ve been writing a lot of thrillers lately and the plotting can get pretty depressing. If you want people to start killing each other by the halfway point, then you need to create some pretty dark characters and put them in a pretty bleak situation. But I also have to remind myself that those are exactly the sorts of scripts that need at least one moment of transcendent beauty. One moment of “aw, what a touching thing to do, I really like that guy now. The world can be a beautiful place.”

And I don’t mean just that lost happy moment with his now-dead wife that the hero is trying to avenge, I mean something that he can possibly return to after the movie is done. Something that makes us say, “If he gets out of this, he could have a pretty great life.” These moments throw everything else into relief. The brighter the bright spot, the darker everything else is in contrast.

When he was developing his photographs in the darkroom, Ansel Adams made sure that every print, whether the negative was shot during nighttime or daytime, wound up with precisely one spot of true white and one spot of true black. Those two points define the range of values and throw everything else into relief. Writers should follow the same rule.