Storyteller’s Rulebook #16: They Call It "Breaking In" For a Reason 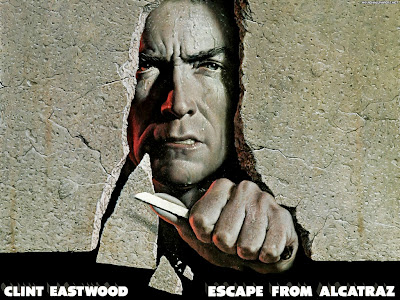 When writers take questions from the public, they’re always asked the same thing: How did you break into the business? And they give their answer, which always involves going through some bizarre, circuitous, back-door channels. And the questioner will often dutifully write down this crazy once-in-a-lifetime route, planning to do the same thing themselves.
But they call it “breaking in” for a reason. The system is set up to keep people out, so every time that someone breaks in, it means that the system is momentarily broken. Breaking into the business is much like breaking out of prison. In Escape from Alcatraz, does Clint Eastwood study how other people broke out and then recreate their proven path? No, he figures out a way that nobody’s tried before. And nobody’s going to be able to re-create his method either. The first thing that the wardens do when someone breaks out of prison is make sure that nobody can ever use that method again.
The film industry does the same thing. When The Blair Witch Project became a huge hit, independent producers all decided that they now had a new foolproof marketing model: Create an ambiguous website early on that makes people wonder if there’s more to your movie than meets the eye. Let buzz build, strike while the iron is hot, and become a millionaire. Lots of people tried to become the next Blair Witch, but nobody succeeded. The targets of the marketing had been astounded the first time, but they quickly grew cynical. 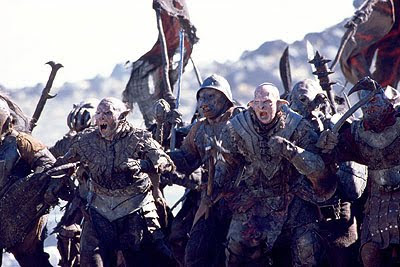 Let's look at it from Hollywood’s point of view. Unfortunately, they see their situation as not unlike the big siege at the end of the second Lord of the Rings movie. And they see you as an orc that wants to seize power. There are thousands of orcs with clubs and axes raiding the gates and there’s just a small band of poorly-trained humans to defend the castle. As Hollywood sees it, they only have a few jobs to hand out every year, but there are thousands of aspirants who have put their lives on hold and gone into massive debt in hopes of getting each one of those few jobs. The decision makers can’t speak to those thousands of people individually or they’d never get anything done, so the chorus of demands becomes a deafening roar that they feel they have to shut out entirely.

But what if one of those orcs is really a nice guy? He doesn’t just want to loot the place-- in fact, he wants to be a human himself and he’s got some good ideas about how to help them. How does this orc let the humans know that he’s there to help? His fellow orcs are attacking the gate with a battering ram. Does he walk past them, knock on the gate, and ask for an interview? No, that wouldn’t work. He maybe gets an introduction to Gimli through a shared confidant from their old mining days. Or he sees a sudden chance to selflessly help out Aragorn, who gratefully decides to hear him out in return. No matter how he gets the opportunity to make his case, have no doubt, he’s going to have to get snuck in through the back door.

Or maybe you answer a craigslist ad for a dog sitter in the downtime before the storming commences. You're supposed to have all sorts of references and foreign language skills, but you've pulled the wool over the eyes of every orc officer you’ve encountered since recruitment; how hard could a dog-sitting interview be?

Well what if I were to tell you this dog owner was none other than Fudian Shaggyfoot, owner of the Crooked Fang? The Crooked Fang- you know, where those dwarf twins who do their racy mindreading limericks got their start. If you want your morality play to go anywhere in Minas Tirith, get it in the hands of Shaggyfoot! This is it. Your orc mother warned you to be on the lookout for this one opening, and here it is!

Once you get the job (okay, I’m not getting ahead of myself. Most humans are not that bright; trust me. And most orcs don’t even bother combing through craigslist. Orcs are happy with the pay they get from the weekly geld stipend and getting high. Orcs have no ambition.)…as I was saying, once you get the job, you need a plan for getting your script in front of Shaggyfoot at the perfect time.

Here’s where it helps to be an orc. Orcs think like dogs. I had a friend when I was a kid who had a dog. This was before my parents moved us to Mordor. That dog loved me. We thought exactly alike. I’d be at my friend’s house (they were a Kender family, but NICE ones.) and that dog would be pawing at the door for like an hour, and I’d say,
“That dog wants to go out”
and my friend was like “Really?”
and I’d be like, “Yea, man. You can’t hear what he’s thinking, but this dog and I are on the same wavelength.” I walked that dog every day for seven months. Kenders, fine people though they may be, don’t have the keen dog intuition.

So, what does a dog do, and how can you make that work for you. Well, dogs like to bring things to their owners: you know, balls, newspapers, slippers, a pipe. Why not a brilliant manuscript?

Well, because maybe Shaggyfoot comes home to relax and his wife is sassing him, or whatever. Maybe they ran out of mead and the humans wouldn’t stop bringing in their own flasks. That’s when you want Shaggyfoot glaring at his stupid mutt with your future delicately clutched in its jaws? No. My point is this- Shaggyfoot needs to be in a good mood when his pooch brings in your highly polished piece. So, train the dog to wait until his master has a couple of drinks in him to unwind. That’s that moment to strike.

Doesn’t it seem like there is always a dog around when you don’t need to practice training one to keep track of his master’s drinking habits? And let me just say, squirrels will not suffice. That should be obvious. You might find a dog a new orc recruit is willing to sell you for fifty geld—but I would advise against it.

Your tentmates won’t be thrilled about the situation. Because there’s no real mead allowed in the camp, training the dog also involves drinking a fair amount of stinkroot extract mixed with carbonated water. Maybe you had tried it a few times in college, but you don’t remember it making you so, I guess you would say, both gassy and extremely emotional. One tentmate might tell you that after one very promising training session, you spent the whole night weeping about the economics of mercantilism. When you come to, the dog will have run off and you’ll be ostracized from the tent for two full nights.

So, after making peace with your “band of brothers”, maybe you revisit that craiglist ad. Maybe you forgot that the ad didn’t actually say explicitly that the job was for Shaggyfoot, just for a prominent citizen of Minas Tirith, and you didn’t really know of any other prominent citizens. Maybe, in your excitement, maybe it was a little hasty to write to your parents that you had made it in and they should prepare for their lives to be turned upside-down with prying entertainment reporters.

have you seen the ghost of the blair witch project on the rise again in the form of a film called catfish?

and speaking of bwp, have you noticed how younger kids talk about it but have no desire to see it?

The orc who thinks he's a nice guy and who wants to help is the orc they really don't want to deal with. The other orcs (Uruk-hai, actually), at least their behavior is predictable. But why do a bunch of rich guys in a castle want help from a "nice" orc they've never heard of?

Yup, that's my point, anonymous. That nice-guy orc is going to have a very hard time convincing the humans that he can be useful to them, especially after they've already given up on recruiting new help and locked the gates.

Maybe the nice Uruk-hai could just plant giant explosives in the weak part of the wall, blast his way in, and, with unstoppable force, take over the place before Gandalf arrives with the Rohirrim.