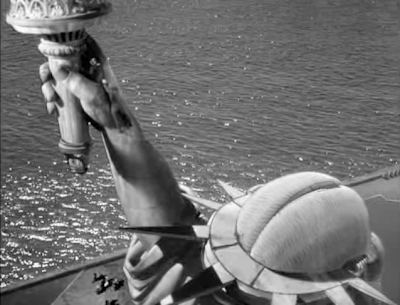 Welcome to Hitchcock Week! Alas, I’ve been scooped right off the bat— One of my inspirations for this blog was the great William Martell who has one site for screenwriting advice and another site for movie analysis. He does Hitchcock every Friday, but I tried to start with one that he hadn’t done yet. Well guess what he just did this Friday? He went much more in depth than I have, so read his too!

The Story: A nazi saboteur torches a defense plant, but the blame falls on an innocent young man, who takes off on a cross-country hunt for the real Nazi that takes him from a ghost town to Hoover Dam to the Statue of Liberty.

How it Came to be Underrated: Hitchcock came to America to make two prestigious literary adaptations, Rebecca and Suspicion, but when he wanted to return to the making the kind of adventure films he loved back in England, he was informed that this was strictly “B” picture material and all his newfound clout still couldn’t get him an “A” budget or big stars. He had to gradually convince America that genre pictures could be art. 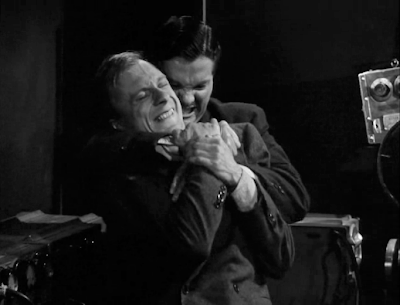 If You Like This, You Should Also Check Out: This movie shouldn’t be confused with Hitchcock’s earlier movie Sabotage, which was an adaptation of Joseph Conrad’s novel “Secret Agent”. And that movie shouldn’t be confused with Hitchcock’s movie that was titled Secret Agent, which was actually an adaptation of Somerset Maughm’s “Ashenden” stories. Confused yet? Don’t be, just watch the movies, you’ll like them.

Today’s Post Was Brought To You By: The Whole Dirty Story! 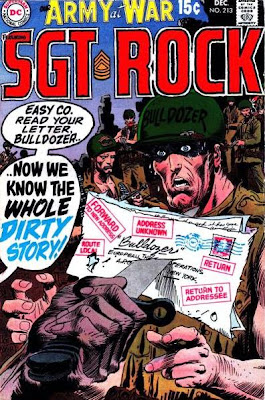 I'm a new-ish reader, but let me tell you I love this blog. I'm getting so many great viewing ideas. As for this Hitchcock series, I really REALLY hope The Foreign Correspondent gets covered here. George Sanders absolutely steals my heart in that movie. It's so delightful to see him playing a good guy for a change, proof that smooth as silk sarcastic British aristocrats don't HAVE to be evil.

Have you ever seen the movie LURED, with George Sanders and Lucille Ball? I think it'd be a solid candidate for inclusion on this blog.

Please, keep blogging! I love your perspective on movies. And you're absolutely right-- Stanwyck and Cooper would have lit this movie on fire.

Thanks for reading-- I love your name! No, I'm not getting to Foreign Correspondent this time around, though Sanders is great in it (giving his foppish explanation for why his last name starts with a lowercase "f"). I have never seen Lured, though I've heard good stuff. I just put it on my Netflix queue.