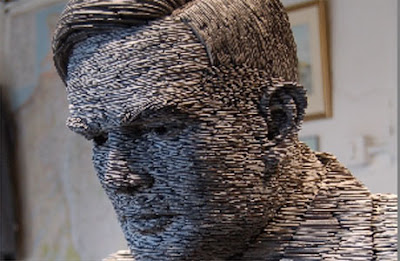 One screenplay I wrote that got me a lot of meetings is a bio-pic of Alan Turing, who invented the computer and broke the Nazi codes during World War II. Turing dreamed up the computer as a way to break life down to its first principles. If a thinking machine had to recreate all human knowledge from scratch, which of our assumptions would turn out to be universally true? This gets at a problem that had bugged people for centuries: Was math itself invented or discovered? Are formulas a way of representing absolute truths, or just a set of arbitrary rules?
The same doubts plague screenwriters. More than any other sort of writers (except maybe sonneteers), we’re expected to follow a very strict formula. All screenplays, even ones that seem very artsy, tend to follow the same fourteen or so underlying plot points. Why is that?
These days, screenwriters are expected to read and memorize books that dictate certain structures. We’re told, like an elementary school math pupil, that wiser men than us have figured this stuff out and we should merely plug in their formulas. This is unsatisfying, and many screenwriters rebel. “What if I want to write something that’s unformulaic?” So we try to write screenplays that go off in wild new directions—and they usually don’t work.
But when we look into the past, we discover something peculiar: The structure predates the gurus. In fact, all the various theories of screenplay formatting, from Syd Field’s three acts, to Frank Daniel’s eight sequences, to newer formulations like Jule Selbo’s eleven steps, owe a lot to Joseph Campbell’s Hero’s Journey, but Campbell didn’t make up these rules either. He discovered them by distilling the essence of the most successful myths from different cultures, all of which turned out to have strikingly similar plot-turns. Clearly this structure-nazi conspiracy is more widespread than we thought!
So where does structure come from? For me, the answer has to do with something I talked about before: the structure of a movie is simply the structure of a problem. All peoples have found that all problems, if they’re big enough, tend to be solved by following a similar set of tasks, and overcoming a predictable series of setbacks along the way. A believable story about any person solving any problem should show these steps. If someone tells you that your story has a structure problem, it’s because some of those steps are missing. They’re not telling you that you broke some arbitrary rules, they’re saying that what you wrote doesn’t ring true.
Posted by Matt Bird at 9:03 PM