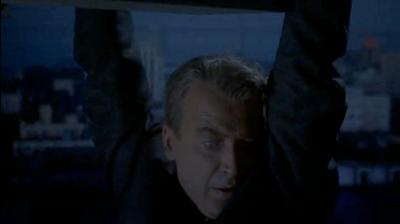 I had the good fortune to teach a section of Andrew Sarris’s Hitchcock course. Mr. Sarris did more than anyone to cement Hitchcock’s critical reputation in this country, and there was no better education than watching the films, hearing his lectures, and then facilitating a discussion with my half of the class the next day. My favorite student questions were those that it never would have occurred to me to ask. When we were discussing Vertigo followed by North By Northwest, I was asked an odd but interesting question. Let me paraphrase the student:

“Everybody pretty much agrees that North by Northwest is a perfectly constructed film. It fits together better than any other Hitchcock movie. And yet you say that Vertigo is considered to be “greater” by almost every critic. How can Vertigo, which is really messy, be better than North by Northwest, which is perfect?”
It was a good point. Vertigo has a very odd structure. It slows down to a crawl in places. It leaves plot threads dangling and forgets to pick them back up. A lot of the backstory doesn’t really make sense as you watch it and some things make even less sense when you think about them later. (How does Madeline/Judy disappear out of that hotel room, anyway?) The plot is untidy and so are the character arcs. We’re left wondering at the end what everybody’s motivation was. North by Northwest, on the other hand, builds and builds and then pays off seamlessly. We understand every beat of Cary Grant’s journey, strategically and emotionally. It’s an immensely satisfying movie to watch.
But depth lies in holes. A few unanswered questions and unresolved emotions are necessary to really have a profound effect on a viewer. Right at the beginning of Vertigo, we abruptly cut from Jimmy Stewart, dangling from a building in terror, with no rescue in sight, to several months later, as he talks with a friend about leaving the police force. We can figure out what happened in between, but because we never see the rescue we’re left with the unresolved disturbance of the emotion we saw on his face. It’s not a plot hole, but it’s an emotional hole, and it bothers us. And that’s what makes Vertigo a greater film. Great art shouldn’t be entirely satisfying. It has to disquiet us a little bit. It has to have a few holes for us to get stuck in.
Posted by Matt Bird at 9:57 PM