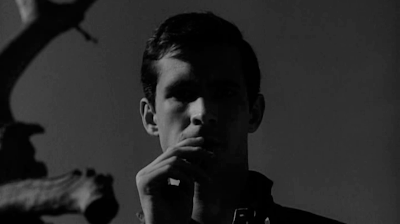 There’s nothing worse than a story with an unsympathetic lead character. Every step of the way, you’re thinking “Yeah, but I could care less. Go ahead-- Check out that mysterious noise-- Get yourself killed. The sooner you die, the sooner this thing ends.”

But making a character sympathetic can be the hardest thing to do . Which is why every writer has a list of tricks that they can fall back on. And the ultimate trick is the one made famous by the late screenwriting guru Blake Snyder: “Save the Cat”. If you have the hero do something wildly sympathetic in the first scene, like save a cat, then the audience will follow them anywhere.

But this is a very limited view of the word “sympathetic”. Yes, you have to win the audience’s sympathy, but you can do it without being morally upstanding. Francois Truffaut claimed that it was impossible to make an anti-war film, because anytime you show someone doing something difficult on onscreen, the audience starts to root for them to succeed, even if they don’t approve.

Nobody knew this better than Hitchcock. Yes, generally speaking, audiences are going to prefer to root for someone moral, or at least someone clever. But if we can’t have that, we’ll root for someone evil and dumb, too. There is no better example of this the swamp scene in Psycho. We never approve of Norman Bates. We never sympathize with his goal, or his point of view. In fact, at this point in the movie, we barely know him. Because of the bizarre structure of the movie, we’ve been rooting for someone else for the first hour. But after she gets killed we’re left watching her killer and we suddenly find that our identification shifts over to him. It’s a neat trick! It turns out that all that’s really required to generate sympathy is to closely watch someone who is: (a) making decisions, (b) doing something difficult, and (c) overcoming setbacks.

At what point do we suddenly realize that we’ve come to sympathize with Norman? With much difficulty, he’s killed our heroine, put her body in the trunk of her own car, and then dumped that car in the swamp. We’re horrified, but we can’t help but get wrapped up in his grim determination. Then, suddenly, the plan hits a hitch—the car bobs back up instead of sinking. And what do we think? We should think “yay, our heroine’s killer will be caught!”, but we don’t. Instead we wonder “oh no, how’s he going to get out of this one?” Truffaut was right. We’ll cheer for anybody if the movie is well made.

The opposite of Truffaut's theory is the idea (from a war photographer--I forget which one) that all war photography becomes anti-war. Once viewers see what war really is, they are repulsed.

The only flaw with what you're saying here is that if "Psycho" is watched as the makers intended, you don't know that Norman has killed Marion at this point. You think that his mother did it, and that he's now covering up her crime to protect her. So you can also make a character doing something unlikable sympathetic if he's doing it FOR A REASON that the audience finds sympathetic. You are right, though, in that even now, when everybody knows Norman did it even if they haven't seen the movie, they still root for that car to sink.

Good point, Elliott. As you point out, my comments apply specifically to subsequent viewings (or first time viewings if you already know the twist).

Your presentation of the unlikeable lead character brought flashbacks of Terry Goodkind's Sword of Truth series.

By about the third book I was hoping that someone, somehow, would kill Richard Rahl and rid the poor reader of the ordeal of reading his 20 pages of objectivist prose every time the writer wanted him to say something.