The Story: 2000 years ago, at the birth of imperial China. A local prefect decides to eliminate the three assassins that threaten his new emperor. But when he is invited to the palace to explain how he did it, the emperor quickly becomes suspicious of his story, and his motives…

How it Came to be Underrated: Yimou, the greatest Chinese arthouse director of his generation, achieved unprecedented financial success with this all-star action epic, but that only increased the grumbling among serious critics that he had “sold out”. That’s a shame, since the movie has as much art and smarts as Yimou's straight dramas.

If You Like This, You Should Also Check Out: The two early masterworks that made Yimou's reputation were Raise the Red Lantern and To Live. They're pretty great.

How Available Is It?: It’s on dvd and it plays often on the Independent Film Channel.

Today’s Post Was Brought To You By: "I Rather Think I'll Give You a Karate Death Chop, Mr. President!" 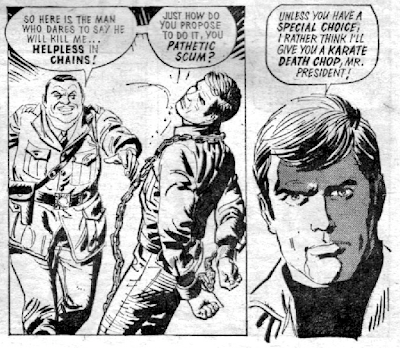 I loved Hero.
To understand Chinese and shadow Yimou Zhang beginning middle & end of production.
Thank you Quentin Tarantino for bringing Hero to the US.

This movie by Zhang Yi Mo is really underrated.... watch also his shows on the river Yangshuo, very impressive.... May I share an article about the Liu Sanjie show in http://stenote.blogspot.com/2017/12/liu-sanjie-show-at-li-river.html
Watch the video in youtube https://youtu.be/LGSdvSa0tg0