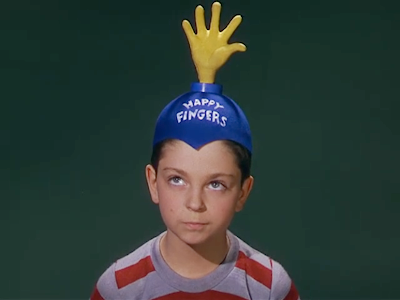 The Story: Little Bart Collins, forced to practice the piano instead of playing outside, dreams up a nightmare world in which his piano instructor is an evil dictator building an army of enslaved boys. Bart recruits a salt-of-the-earth plumber to help him mount a revolution.

How it Came to be Underrated: Absurdism is never in fashion, but it’s baffling that this movie didn’t find some way to break through in the ‘50s, and even crazier that it didn’t become a campus favorite in the ‘60s or ‘70s. It has been rediscovered on dvd, but it’s hard to fathom that this movie still hasn’t become a household name like the Grinch or the Lorax. 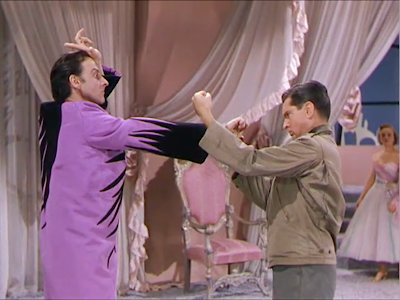 If You Like This, You Should Also Check Out: There’s nothing else remotely like this. Mary Poppins, maybe? That’s always worth watching again.

How Available Is It?: It’s on dvd, but not on Netflix watch instantly. Resist the temptation to just watch the musical sequences on YouTube.

Today’s Post Was Brought To You By: Missile Attack! 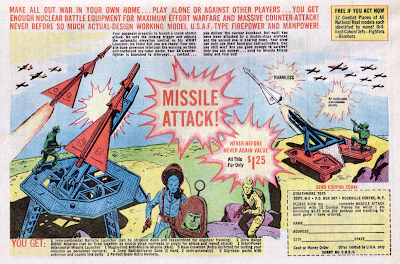 I saw this in college in a double bill with "Plan 9 from Outer Space." My best friend and I still love to quote our favorite bit of dialogue from the film:

Thanks, Cheryl, you've got a fine blog yourself.

As you'll see, I carried the atomic theme over to the next day...

Have always loved this movie which is, ahem, the same age I am.

this blog is going to be a Fain Family favorite. We'll talk about 5000 hmmm

Apparently this film originally ran over 2 hours. Noone is quite sure what wound up on the cutting room floor, but the bootleg soundtrack had acetates of some of the deleted songs.

I'm so glad you highlighted the dressing up song. It's such an amazingly genius thing to have the villain, on the verge of unveiling his plan and conquering the heroes, sing a nonsense song about his clothes.

I agree this is underrated, and so I wrote about it myself for an online magazine! The article can be found at http://fantasy-films.suite101.com/article.cfm/worth-another-look-the-5000-fingers-of-dr-t-1953

Reading your critique of this little gem was pure pleasure for me. So many highlights, usually the songs, and especially 'Come on and Dress Me'. But as you write here, don't seek out the clips, watch the entire film. Two things will happen; time will fly, and it will stay with oyu a long time.

To Cheryl. I originally saw this film on TV in the late 1950s, and have loved it ever since! Your favorite line is also my best friend's and my favorite. "Is it atomic?" "Yes sir, VERY atomic!"

Thanks for sharing superb informations. Your web site is very cool. I'm impressed by the details that you’ve on this blog. It reveals how nicely you understand this subject. Bookmarked this website page, will come back for extra articles. You, my friend, ROCK! I found simply the info I already searched all over the place and simply could not come across. What a great web sit monitor arms